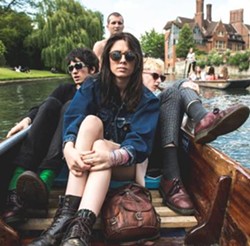 Singer Ellie Rowsell says she was simply a “tryer outer” before the UK alt-rock act Wolf Alice came together a few years ago. But now, as the singer in a band whose full-length debut was just nominated for a Mercury Music Prize, she’s regularly profiled in music magazines and heralded as someone to watch.

“I always tried to sing with different groups,” she admits in a phone interview as she and her bandmates drove to a tour stop in Missouri. “I can’t do sports. I can’t dance. I just listened to music. I couldn’t do anything else. That was the only thing I got quite good at it. It was trial and error when I was growing up. By the time I was 12 years old, I listened to whatever my parents listened to or whatever was on the charts, that kind of thing. And then, I started listening to the Strokes, Kings of Leon and the Yeah, Yeah, Yeahs. From there, I mainly listened to guitar music. I was always interested in pop music and other styles of music as well.”

When the band first formed, it was an acoustic duo that featured Rowsell on vocals and Joff Oddie on guitars. But the dynamics shifted when Oddie plugged in and the group added drums and bass. Released in 2012, the band’s first single “Leaving You” starts off as something sparse with a soft guitar riff and whispered vocals. It gradually increases in volume and attains a kind of bluesy swagger. That single quickly turned the band into an overnight sensation and with its debut EP, Blush, the band built upon that initial success.

“We didn’t have much experience in the studio,” says Rowsell when asked about the EP. “We were under a lot of pressure. We put out two singles that caught more attention than we anticipated. In theory, we didn’t have that many songs or that much experience or know what we were doing. We didn’t have much time. It was fun, but I don’t think we knew what we were doing. It was good for the time. We had an idea in our heads that it needed to be professional but we weren’t ready.”

She says the band was better prepared for its second EP, Creature Songs. And that momentum carried into the recording of My Love is Cool, which came out earlier this year. On it, the group worked with veteran producer Mike Crossey (Arctic Monkeys, The Kooks, The 1975). One of the denser songs on the album, “Moaning Lisa Smile” features echoing vocals and a veritable wall of sound.

“I guess we just had this riff that Joff was mucking around with,” Rowswell says. “It was pretty heavy. We thought we could make a song that was built around that riff. It was direct and angry and heavy. We just mucked around with that. There’s not much to it.”

The band’s music has been described as “the lovechild of folk and grunge,” something Rowsell says isn’t entirely accurate.

“Maybe if someone explained it to me, I’d understand it,” she says. “I think folk music is melody focused and I think that’s something we are as well, particularly with this album. We like distortion so pop music over loud guitars might be more accurate. Maybe for Creature Songs would have been more applicable. I don’t know what that is, but it’s hard to describe what we are because we don’t listen to one genre of music. We don’t write one genre of music. Maybe you could call us alternative guitar music. Or indie music. Everyone calls us that as well. I don’t think it’s a bad thing. I just think it’s very weird.”

She thinks the next album will represent yet another evolution for the group.

“I think we’ll still approach everything in the same way," she says. "We just want to make sure we have the best songs regardless of what genre or what direction we want to go in. If we want to go in a hardcore punk direction but all the best songs are folk, we’ll make a folk album. I think we’re leaning toward making an album that will be fun to play live. That’s the vibe we want. I would still want slow ballads and pop songs too.”