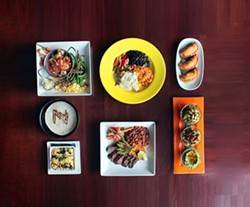 The people behind Cleveland’s ambitious new downtown lakefront development project have selected an operator for the restaurant that will help anchor Phase One – and it isn’t a Cleveland name.

“It’s really shocking – and it’s quite an honor for sure,” says Zack Hirt, who along with his wife and business partner Lisa opened Akron’s popular Nuevo Modern Mexican and Tequila Bar (54 East Mill St., 330-762-8000) in early 2014. “The developers came down here, checked us out and liked our concept. They said it was a good fit for Cleveland and that location.”

The two-level eatery, also to be called Nuevo Modern Mexican, sits like the rest of the development along the East Ninth Street Pier, north of the Rock and Roll Hall of Fame. Phase One also includes retail, residential and another casual dining option. The long-range plan for the mixed-use neighborhood includes more than 1,000 apartments, 50,000 square feet of retail, 80,000 square feet of office space, and a high-quality school.

Scene wrote about the Akron restaurant back in March after a very enjoyable dining experience. After two decades of working in other people's kitchen, eight of which were spent at Akron's Crave, Hirt analyzed his local market for opportunities and settled on modern Mexican.

"I've been working in kitchens for more than 20 years, and I could pretty much do anything," the chef told me in a post-review phone call. "So when we decided to open a restaurant, we just looked at the market. Certainly, Momocho, Lopez and Paladar were inspirations. There's nothing like that down in Akron."

Diners at the two-year-old spot are treated to contemporary takes on Latin dishes, like duck confit and goat cheese empanadas, salsa and guacamole samplers, and seafood ceviche. Also on the menu are assemble-your-own tacos (corn or flour) built around pork shoulder, short rib, pan-seared shrimp and tequila-braised beef tongue. Classics like carne asada and chicken en crema join modern entrees like cumin and cinnamon-rubbed heritage breed pork chops and adobo-braised lamb shanks. All of it gets paired with an impressive tequila and mescal list.

Hirt says that for the lakefront eatery he’ll add more seafood dishes to the menu.

The two-story structure will seat 120 diners on the main floor, with seating for another 40 on twin patios that face both shore and skyline. A flexible second floor space can be used for overflow dining or special events for up to 250 guests inside and another 40 out.

Hirt still can’t believe his good fortune. Business is going well enough down in Akron that he and his wife were hoping to expand – but not for another three to five years.

“We were looking at Cleveland anyways, but never in a million years did we think lakefront,” he says.

Dick Pace and Cumberland Development recently broke ground on the project and intend to have the restaurant up and running before the Republican National Convention this coming July.