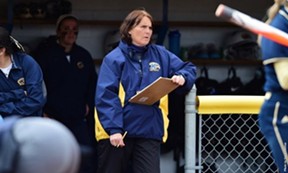 In an explosive civil complaint filed in U.S. District Court Monday, Kent State University senior and former softball player Lauren Kesterson alleged that she was raped by her coach's son during her Freshman year.

The complaint further alleged that the coach, Karen Linder, used her influence to quash the allegation, and that the university itself was complicit in the cover-up, side-stepping school policy and Federal law when Kesterson later reported Linder's inaction.

Subodh Chandra is the lead attorney representing Kesterson. He said in a press release Monday that college coaches wield considerable power over their athletes.

"But with the power to demand obedience comes the responsibility not to abuse that power," he said. "No student-athlete should ever have to choose between reporting sexual abuse and playing the sport she loves."

But if Kesterson's case illustrates anything, it's that female college athletes still do have to make that choice; indeed, the lawsuit alleges that the cover-up of Kesterson's rape makes female athletes at Kent State more vulnerable to sexual assault.

The 35-page complaint chronicles the timeline of events, beginning in the fall of 2012 when Kesterson arrived from Washington state on a scholarship with her twin sister to play softball.

Kesterson and Coach Karen Linder's son Tucker, who played on the Kent State baseball team, became friends. They even exchanged "minor intimacies" on one occasion that semester. On the night of Dec. 7, though, an allegedly intoxicated Tucker Linder didn't listen to Kesterson when she said, at least 10 times, according to the lawsuit, that she didn't want to have sex.

Kesterson was distraught and angry. She was tested for STDs and for pregnancy at the university health center, and was emotionally devastated in the aftermath. Her grades began to slip.

She didn't officially report the assault until the spring of 2014, the tail end of her sophomore year. At that time, she'd already told her family and close friends about the incident and was receiving treatment. Karen Linder noticed something was amiss. She asked Kesterson in a standard exit interview if she'd been sexually assaulted.

Kesterson said that she had. She filed a formal Title IX complaint with the university and confirmed to Karen Linder that it was her son Tucker who raped her. The lawsuit says that Coach Linder asked: "It wasn't my son, was it?"

After Kesterson formally lodged her complaint, the lawsuit alleges that Karen Linder did nothing to report it, as required by university policy and Title IX. All she instructed Kesterson to do, the lawsuit says, was keep quiet.

The lawsuit suggests that Karen Linder knew what the official policies were because she'd followed them five days earlier, when another student had reported a rape.

"Coach Linder knew exactly how to handle a rape allegation," the lawsuit says. "She just chose to ignore the policy and the law in Ms. Kesterson’s case."

In the following year, Kesterson's academic performance and physical health continued to suffer. Furthermore, she was treated with "extreme indifference" by coach Linder. Beyond that, the lawsuit says, Kesterson was required to attend mandatory team events at Linder's home, where images of Tucker — including a Fatheads decal — were everywhere.

That summer, between Kesterson's Junior and Senior year, she researched what Linder should have done. Kesterson took it upon herself to file another Title IX complaint, this time against Coach Linder herself.

But the formal complaint was never filed. After Kesterson met with the university's Deputy Coordinator for Title IX and signed the relevant paperwork, the University Athletic Director Joel Nielson intervened.  Kesterson believed Nielson was trying to keep the matter "as quiet as possible."

Four days later, Coach Karen Linder resigned as head coach of the softball team after 19 seasons at the helm. She was not fired for cause and was thereby permitted to spin whatever narrative she wished: To the Portage County Record-Courier, Linder said that athletics had changed and she was moving in a "new direction" because of the "world of entitlement" that athletics had become, a world where "when you tell a kid to do something, some of them need three reasons why they need to do it this way."

In private, the lawsuit alleges, Linder spawned vicious rumors about Kesterson which created an atmosphere of hostility. Players were told by interim Head Coach Eric Oakley — this was in Kesterson's senior year — that anyone who spoke ill of Coach Linder would be booted from the team without warming. At an alumni event later that semester, a former softball player sold t-shirts that said "We Support Karen Linder."

The lawsuit alleges that the University made no effort to dispel Coach Linder's false statements about her departure. Lauren and her sister, given the environment in which they were blamed for the departure of a beloved coach, quit the team.

The lawsuit seeks damages for sexual discrimination, including retaliation; denial of equal protection under the 14th amendment; and the intentional infliction of emotional distress. Both Karen Linder, as an individual, and Kent State University are named as defendants.