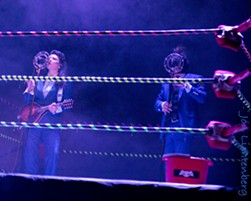 Though Tool/A Perfect Circle singer Maynard James Keenan didn’t take Puscifer, the artsy alternative rock outfit he fronts, on the road until 2009, the band dates back to the mid-’90s when it played as part of variety shows hosted in small clubs around Los Angeles. Keenan has kept that element alive over the years, and last night’s engrossing performance at the Akron Civic Theatre, which featured the band along with a troupe of wrestlers wearing Mexican wrestling masks,  again illustrated just how performance art-oriented the group’s live shows have become.

Keenan, who looked a bit like a giant rooster as his Mohawk extended out of the mask he wore for the entire set, and singer Carina Round began the two-hour show by performing from inside of the wrestling ring set at the rear of the stage. Throughout the concert, they would move from the rear to the front of the stage and back again, sometimes even sitting on the bleachers to observe the wrestlers as they staged a series of bouts between the show’s four “acts.” Drummer Jeff Friedl appropriately sat center stage; he hammered away at his kit relentlessly throughout the set, driving most of the tunes with a mix of organic and electronic percussion and drums that added real texture and depth to the songs.

The audience responded most favorably when Keenan, whose tempered voice contains elements of a truly tortured soul, took lead vocals on songs such as “Agostina,” a track from the group's latest album, Money Shot, and “Vagina Mine,” a tune he practically whispered. He howled effectively on “The Arsonist,” a song that references the cartoon characters Beavis and Butthead, and for “Conditions of My Parole,” he literally hung on the ropes of the wrestling ring and sang through a bullhorn to a twangy guitar riff. He also chanted effectively on “Grand Canyon,” a song that was accompanied by high def video images of various desert landscapes.

“I talk a lot of shit about Ohio,” Keenan, a Ravenna native, said at the concert’s conclusion. “The truth is; this is where I’m from. All the good and all the bad started here.” You get the sense that Keenan thinks of Puscifer (more so than Tool or A Perfect Circle) as a place where he can mull over all that good and bad. He has, after all, referred to the band as a “playground for the various voices in my head.” Now, Keenan’s vision for it has evolved into something theatrical and trippy – think Cirque du Soleil with a better soundtrack. Can't wait to see where he takes things next.