By all measures, Barrio Restaurant Group is on a roll. Since debuting in Tremont four years ago, the popular Cleveland-based taco concept has gone on to open thriving shops in Lakewood and Downtown. But owners Sean Fairbairn and Tom Leneghan have even grander plans, and in support of those projects they have hired veteran chef Pete Joyce, who will leave his post as Culinary Director for Crop Restaurant Group.

“Pete Joyce will help us get to the next level with the Barrio concept, which means hopefully expanding quite a bit,” says Fairbairn. “Getting a guy like Pete will help us get things organized, get our kitchens in the shape the way they should be, and help manage inventories, keep costs under control and staffing.” 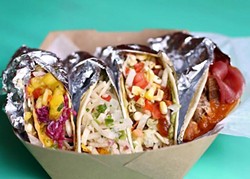 Fairbairn and Joyce worked together years ago for Hospitality Restaurants, when Joyce was executive chef at Blue Point Grille.

Barrio is currently building a new commissary in the Clark-Fulton neighborhood, another step necessary to support imminent expansion.

“That’s where we will produce and deliver all food daily to all our locations,” says Fairbairn. “Quality control is the biggest thing. When you have chefs trying to create these recipes in each store it gets a little goofy.”

“That’s what I look forward to most, helping out with the buildout of commissary, to push food consistency and food safety, because it’s a big issue,” says Joyce, who will oversee the commissary as well as all restaurant kitchens.

“It’s a good move for me,” he adds. “At my age and in my position, offers like this aren’t going to come too rapidly. Most of my career has been white table cloth oriented, but I think this is a good move. A lot of people are going on the casual side and I don’t mind it at all. It doesn’t hurt my pride. I like to make good food and make it consistent.”

In addition to looking at potential spots on the west side of town, the east side of town, as well as possible sites in Columbus and Pittsburgh, the Barrio Restaurant Group is adding a third food truck and still is working to open a microbrewery and restaurant in the former St. Gregory the Theologian Byzantine Catholic Church in Lakewood's Birdtown neighborhood. That should happen in late fall or winter.

“We’re taking our time, trying to find the right places and get the right people behind us, and that’s why we brought in Pete Joyce, to help us get to the next level,” says Fairbairn.