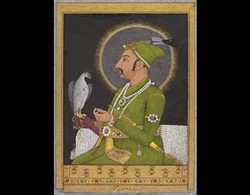 Continuing its 100th anniversary celebration, the Cleveland Museum of Art presents its latest Centennial Exhibition, Art and Stories from Mughal India. Stretching from the Indian subcontinent into Afghanistan, the Mughal Empire ruled for more than 300 years, from the early 16th century until the arrival of British colonial rule in 1857. The Mughal Empire is known for its unique architecture, including the iconic Taj Mahal, as well as colorful, often intricate, miniature paintings that convey a narrative that not only appeals to the viewer’s eyes, but reveal diverse historical and cultural traditions through royal creative expression.

On view now, the exhibition includes more than 100 miniature royal court paintings from the CMA’s own collection, as well as jewelry, textiles, costumes, architectural elements, decorative arts and arms and armor from the Mughal Empire. Much of the exhibition comes from the 2013 milestone acquisition of the Catherine Glynn Benkaim and Ralph Benkaim Collection of Deccan and Mughal paintings, many on view and published for the first time.

“The Cleveland Museum of Art has long boasted a particularly fine holding of Indian art, and with the acquisition of the Benkaim collection of Mughal paintings, we are now fortunate to have an extraordinary representation of one of its most celebrated artistic traditions,” says CMA Director William M. Griswold. “This exhibition—beautifully curated and magnificently installed—vividly evokes the richness and cosmopolitanism of one of the world’s great empires.”

Photo reproductions simply do not do these paintings justice. The intricate details and brilliant colors must be seen in person. Thankfully, the CMA provides magnifying glasses to help appreciate these impressive details.

In conjunction with Art and Stories from Mughal India, the CMA has developed a  free app supplemented with contextual information. The CMA Mughal app includes "100 Paintings/100 Facts," an audio glossary, interactive calendar of related programming and museum information, such as hours, directions, parking info, dining and admission to Art and Stories from Mughal India.

“The paintings are products of a powerful, multiethnic dynasty of rulers who valued art and literature as essential elements of court life,” explains Sonya Rhie Quintanilla, the George P. Bickford Curator of Indian and Southeast Asian Art. “They were made to inspire awe and delight, and this exhibition aims to do the same by making them accessible to audiences today.”

Through CMA Mughal, Quintanilla reveals visual details, contextual facts and storytelling as well as pronunciation and definitions of terms and names. CMA Mughal is available in the Apple Store. It is part of a new series of apps developed in conjunction with specific exhibitions. Similar to the features found in the CMA’s award-winning Art Lens app, these exhibition apps are customized for each temporary exhibit.

Additionally, the CMA has published a gorgeous, 368-page companion catalog featuring more than 400 full-color images, as well as thoughtful essays connecting the imagery to its historical context. Following the essays, the catalogue includes a comprehensive section on the 95 Mughal and Deccan paintings from the Catherine Glynn Benkaim and Ralph Benkaim Collection.

Throughout the duration of the exhibition, the CMA has planned dozens of programming events.

At noon on Tuesdays, join curator Sonya Rhie Quintanilla for a short, informal discussion of specific works from the exhibition. Each week, meet in the exhibition to explore a new theme or story. Scheduled topics include:

At 6 p.m. on Wednesday, Sept. 14, Ruby Lal, professor of South Asian Studies at Emory University, discusses Nur Jahan, “Light of the World,” the only woman ruler in the long reign of the Mughal Empire. On Wednesday, Sept. 28, the CMA presents a lecture, tour and demonstration of Kathak Dance, an ancient classical Indian Dance form originating from Hindu storytelling traditions and celebrated in the Mughal courts. Sujata Lakhe and students from Cleveland’s Anga Kala Kathak Academy will present the demonstrations.

Another special event will be the First Annual Distinguished Lecture in India Art at 2 p.m. on Saturday, Oct. 15, in the Gartner Auditorium. Asok Kumar Das, director emeritus of the Maharaja Sawai Man Singh II Museum, Jaipur and former deputy keeper at the Indian Museum Kolkata, presents a lecture on Basavana, considered one of the most skillful Indian artists, and a contributor to the initial establishment of the imperial Mughal painting style. The lecture is free, but reservations are required. With limited seating, registration opens on Aug. 1.

Programming also includes films, performances, yoga at the museum, an Art and Fiction Book Club and a Mughal-inspired MIX event. MIX: Mughal (Friday, Sept. 9) includes a pop-up restaurant featuring Indian inspired food and drinks, as well as music and dancing on the museum’s south lawn. Tickets for this 18 and over event are $8 in advance, $10 at the door or free for CMA members.

In celebration of the museum’s 100th anniversary, Art and Stories is free and open to the public. This special exhibition remains on view through Oct. 23 in the Kelvin and Eleanor Smith Foundation Hall. All events are free unless otherwise mentioned, but some require tickets or reservations. For more information, visit clevelandart.org.