Update: In the Wake of the Election, Joseph Arthur Talks About His Anti-Trump Song 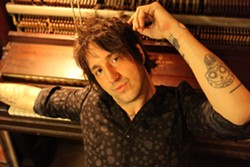 Update: Earlier this year, Akron native Joseph Arthur took Donald Trump, who was not yet the president-elect, to task with “The Campaign Song,” a rousing number typified by droning guitars and sneering vocals. The track includes snippets of Trump speeches as Arthur sings, “Trump is a chump.”

“My first version of the campaign song was nuts,” says Arthur via phone as walks the streets of Brooklyn, where he says he’s preparing to play some shows and trying to overcome jetlag after returning from a European tour. He performs at 8:30 p.m. on Wednesday, Nov. 23 at the Tangier in Akron. “Once I got the 1930s lingo idea, it was pretty cool. I went on tour with RNDM, and I had been on a news hiatus. I got off the road and checked in on the news. I remember writing the song when I was on the road. I saw the rallies and crazy weird shit I’ve never seen in America before. I thought it was nuts, and I wrote the lyrics and then wrote the song. He hadn’t even been elected as the Republican choice yet. To me, [the song] was pro-Bernie in my little sphere, but I guess it’s mainly anti-Trump more than pro anyone.”

Both outsider artists, Arthur and Tunick have known each other for years and have collaborated in the past. When Tunick heard Arthur’s tune, he told Arthur that he wanted to contribute to the video.

“We finally got it all together and got it out, and it seemed like okay timing,” says Arthur. “Eminem released a song the day after mine called ‘Campaign Speech.’ That was kind of cool. I like what he did. It’s a totally different thing, but it was dope. I love it. I think it’s cool the title is almost exactly the same as my song.”

Arthur says he thinks people "weren’t that worried" about the possibility of a Trump presidency and seemed "bored" by the Clinton and Trump presidential campaigns, but he says he always felt the “the amount of danger” that Trump represented was something that required more action. When he performed at a David Bowie tribute in New York in April where he covered the Bowie track "The Man Who Sold the World," he waved an American flag that read “Fuck Trump” on it.

“I caught some flack for that, and that was before he became the Republican nominee,” he says in reference to the flag-waving incident. “I don’t know what I’m talking about with politics, but I did sense the danger. The wild thing is that I’ve been in kind of a bubble. I wasn’t listening to how people were responding to it. I was responding and being free with my response. Once I investigated what other people said, I realized I wasn’t that far off point. Some of my favorite commentary people were saying the same things I was saying. What I responded to heavily was the wild way in which he was promoting his campaign through the racial stuff and the ‘build the wall’ stuff. As soon I come out against him, then people start telling me that Hillary Clinton is a criminal and all that stuff. I’m not an expert. I’m just going from my gut. Normally, I would go for the outsider. My kneejerk position was to go for Bernie [Sanders].”

Arthur played a show in Manchester, England, the night after the election and read a poem with the repeated line “countries like junkies.” In it, he referred to Trump as “a clown with no brain in a red-button war.” He says it felt “therapeutic” to read the poem.

“Manchester is the Akron/Cleveland of the UK,” he says. “Both have put out great music. Manchester is huge. You should do a comparison between the two. I wonder who would come out on top. Any UK person would say, ‘Are you kidding, mate? Manchester, easy.’ But we have some high rollers [in Ohio] too. That would be an interesting subject for an article. It could even be a whole book.”

He says he won’t let the results of the election put on a damper on his annual appearance at the Tangier, where he’ll undoubtedly have some friends and family members in the audience.

Additionally, Arthur says he currently has a “loose concept” for his next album but says it won’t be a concept album per se. Real World, Peter Gabriel’s boutique record label, has plans to reissue his 2002 album, Redemption’s Son, so he says he doesn’t want a new studio album to interfere with its reissue along with the reissue of the Junkyard Hearts EPs.

“I feel like I need to have some reason to put out an album other than it’s just ten songs,” he says. “I could cobble something together but we want to do this reissue because I’m engaging again with Real World Records. We want to do a reissue of that along with Junkyard Hearts I, II, III and IV. It’s okay to shine a light on the past work. When you’ve been around as long as I have, you have to remind the kids of who you are. It’s like, ‘Hey kids, this happened before you were born.'”

“Woody Guthrie wrote a protest song about Donald Trump’s grandfather. So this is like carrying the torch for Woody,” Joseph says in a press release. “I used the lingo of a by gone era to accentuate that aspect like ‘America really should boot bums like this out’ and ‘Old scratch’. I wanted to use the lingo of Trump’s elders as subtle form of linguistic manipulation designed to send him under his bed shivering like the whimpering maggot that he is.”

“The old guard, extremist republicans are an enormous threat to the rights and freedoms of women and immigrants,” Tunick says. “It was true before but has become even more dangerous with the Republican ticket of Trump and Pence. Joseph Arthur’s new anti-Trump song recognizes this threat as he voices his opinion regarding these issues in the best way, a song that we can all really get behind. Spreading the word through protest music and art has a long history in Rock and Roll. I am honored that Joseph chose my footage from my 100 woman nude Cleveland Republican National Convention art action to interweave into his new video. These women went to extremes to show their disdain for the Republican ticket. I hope everyone can share Joseph’s new song!"