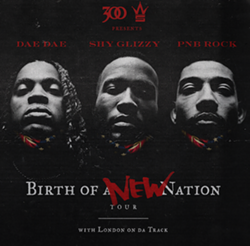 The trailer for Birth of a New Nation, a 28-city tour featuring artists on the New York-based 300 Entertainment, includes caricatures of presidential candidates Donald Trump and Hillary Clinton.

The tour, which features some of the label's best hip-hop acts including Dae Dae, Shy Glizzy, PNB Rock and London On Da Track, kicks off on Nov. 10 at the Agora Ballroom.

“One thing about us is that we’ll always be socially conscious and we’ll make sure if the time calls for the young people to have a voice and take some action and have some perspective on taking control of their lives, we’ll be at the forefront of it,” explains 300 Entertainment co-founder Kevin Liles, who says the label was started in 2012 to have “the mindset of an independent and the muscle of major.” He spoke to us in a recent phone interview. “You can’t get elected without us, so you have to accept us. There’s a little bit of satire in the video, but Birth of a New Nation is for every young person out there who wants something different.”

Liles says the label aims to do an artist development tour every year and pairs together artists who hail from different regions across the states. This year’s lineup features some of its most promising artists. Atlanta-based rapper Dae Dae just issued the mixtape 4 Reasons; its lead single, "What U Mean (Aye Aye Aye)" has become a hit. The Washington, D.C.-based Shy Glizzy delivered a hit earlier this year with the racheting "Awwsome," a tune that spawned a remix by A$AP Rocky and 2 Chainz. Philly’s PNB Rock became a crossover success with the poppy, AutoTune-heavy track "Fleek” which has garnered over 2.4 million Soundcloud streams.

The tour’s title alludes to the Nate Parker film Birth of a Nation, a dramatization of the slave rebellion led by Nat Turner in the 1800s.

“I’m a big fan of the film,” says Liles. “I’ve known Nate and when I heard that he went to his hometown in Virginia to make a film about a moment in history and financed it himself, I realized that he embodied everything about being an entrepreneur. I applauded his art. I always say there comes a time, especially with everything going on right now, that we have to have such a voice. What better way to say birth of a new nation with doctors and lawyers and presidents? It’s kind of a twist on the movie but more importantly it’s about supporting the new entrepreneurs.”

Tickets for the Birth of A New Nation tour are available via BONNtour.com.

Speaking of Birth Of A New Nation Tour, Agora Theatre