How Did 'A Christmas Story' Become The Offbeat Classic That It Is? 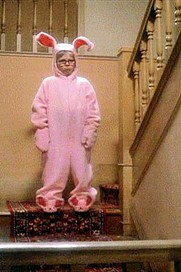 This week, not too long before we find ourselves looping A Christmas Story for hours on end and filling our coffee tables with towering empty bottles of 12 Dogs, Vanity Fair decided to publish an excellent piece on how that movie — filmed right here in Northeast Ohio, as we all know — came to be the yuletide tradition that it is today. Skip the triple dare and go right for the throat.

"[The movie] brought a bracing blast of satire and realism, wrapped up in a hilarious, pitch-perfect tale of a middle-class family negotiating the perils of Christmas, recalled through the eyes of a nine-year-old boy," Sam Kashner writes, lining up the Christmas movie traditions that preceded it (It's A Wonderful Life, etc.).

It's a really nice #longread, if you're into such things, and it dovetails perfectly with the season before us. A Christmas Story came and went through the box office, grew into a cult classic and, years later, became synonymous with the holiday itself.

As for the film world, A Christmas Story helped (in part) usher in the quirky realism of, say, Bottle Rocket and, later, Napoleon Dynamite. American audiences in the 1980s and 1990s and beyond grew to crave the sort of entertainment media that matched the complicated weirdness of real life.

“Don’t tell me you’re going to create a new genre for your movie. Everyone’s always saying there’s a new genre. There is no new genre. There are comedies, dramas, and tragedy," writing guru Robert McKee once said. “There’s only one movie that I can argue has been a new genre in the modern era, and that movie’s a little movie—I don’t know if you guys have heard of it—called A Christmas Story.”

Vanity Fair's piece touches both on the behind-the-scenes perspectives of how the film was being received and the emotional anecdotal stuff that shows us how the country came to love it.