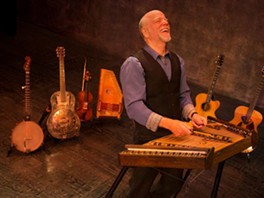 When folk singer John McCutcheon appeared on an Australian radio program last year to promote an upcoming concert, he wrote an anti-Trump song right before going on air.

He explained to the show's host that everyone in Australia was asking him about what was going on in the States with the “grassroots billionaire” who at the time was running a hate-filled campaign to be president. “You might find it kinda funny that he inherited his money from a dad who wouldn’t rent to blacks or Jews,” McCutcheon sings in the track.

“[In Trump], we have elected God’s gift to songwriters,” says McCutcheon, 64, who returns to Nighttown at 8 p.m. on Thursday, Jan. 26, in a recent phone interview. “[With him], there’s always stuff to write about. That’s almost too easy. What’s more challenging — at my age, I don’t just want to do the simple stuff — and more interesting and needed is ways in which we can get beyond all the chatter. The news media in all its shapes and forms draws our attention to the upper atmosphere where the average person has no access and virtually influence. For those of us who believe that change comes from a foundational place, there’s lots of work to do and ways we can change this country and need to. I’ve been writing stuff that takes a sideways view of a lot of [the political climate].”

Generally regarded as a master of the hammered dulcimer, McCutcheon only learned to play the instrument by happenstance. He had a girlfriend back in the early 1970s who went to a summer workshop at a West Virginia college. One of the classes was instrument building. They built a couple of different instruments. A hammered dulcimer was the first one. So on a visit to see her, McCutcheon learned to play it. More than any other instrument he’s ever played, he just took to it. That was a time when you couldn't just sign up for a class or go online and watch a YouTube video that would instruct you how to play an instrument.

Another formative experience involved a trip to Appalachia to learn how to play traditional folk music. McCutcheon was in college at Saint John's University in Minnesota when he decided to take a trip to Appalachia to spend time with some of the folk musicians there so he could learn the tricks of the trade. McCutcheon admits that hitchhiking his way around the country as a youth could've ended badly. But he says he was fearless when he was younger and hitchhiked some 7,000 miles while conducting his musical research.

That kickstarted his career and he's now issued some 30 albums over the course of a career that stretches back decades. His latest effort, Trolling for Dreams, features tender piano ballads ("The Dance") and twangy narratives ("Sharecropper's Son") that show what a natural songwriter and singer he is.

“Some of the songs have been around for some time,” he says when asked about the release. “They just didn’t seem to fit on other collections. A bunch are newly written. Some were even written in the studio. About a year ago, I got seriously sick. I had two months where I had to cancel all my gigs and stay home. It allowed me to go through my files of what I thought were unfinished songs and to really work on them.”

McCutcheon says he didn’t write the songs with a concept in mind, but a theme emerged once the final product started to take shape.

“More than anything I have done in a while, this one didn’t appear to have a theme, but as I step back and look back at it, a lot of it is about mortality — imagine — and change," he says. "I took my father on a road trip for about three days. It was one of the most remarkable experiences of my life. My youngest son got married and a couple of mentors passed away. I’m a guy who 45 years into his career is looking around with eyes I couldn’t have seen with, even ten years ago.”

McCutcheon says he currently makes "enough money to get by." After a long stint on Rounder Records, he now self-releases his album. He cites Arlo Guthrie and Billy Bragg, both of whom have started self-releasing their albums, as inspirations for taking a DIY approach. And for McCutcheon, who still steadily tours despite his age, playing Cleveland always proves to be a treat.

“Nighttown is so darn intimate, everyone is almost in your lap there,” he says. “I have to play some of the old songs, but I can play almost every song on this album live in concert, which isn’t always the case. I’m performing a lot of the new ones, and I’m writing new songs all the time too.”