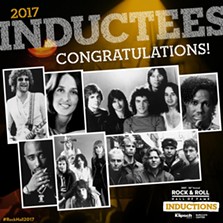 Update: Rapper Snoop Dogg will appear at the upcoming Rock Hall Inductions to pay tribute to the late Tupac Shakur, one of this year's inductees.

While the gossip website TMZ reports that Dr. Dre has also been invited to the festivities, the Rock Hall can't confirm his appearance.

As the event nears, expect the Rock Hall to announce more details regarding presenters and performers.

Original Post 1/27/2017: The 2017 Inductions that take place on Friday, April 7, at Barclays Center in Brooklyn will include the inductions of Joan Baez, Electric Light Orchestra, Journey, Nile Rodgers (of Chic fame), Pearl Jam, Tupac Shakur and Yes into the Rock & Roll Hall of Fame.

Earlier today, the Rock Hall announced a few details regarding the ceremony.

Additional performers and presenters will be announced at a later date.


The Rock Hall will also open a special exhibit on the 2017 inductees in conjunction with the ceremony. Items from Baez, ELO, Journey, Pearl Jam, Rodgers, Shakur and Yes will go on display when the exhibit opens on March 31.