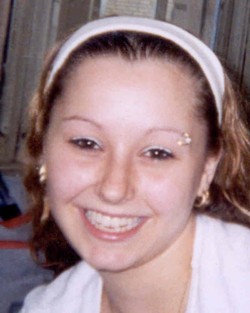 Amanda Berry, one of the three women captured and imprisoned by Ariel
Castro before a dramatic escape in 2013, is joining Fox 8 News.

"We'll be working with law enforcement and anyone who needs our help," she said.

Berry said that given her family's arduous and often lonely struggle to obtain information in the aftermath of her own disappearance, she feels uniquely qualified to advocate on behalf of missing persons, especially children.

Which she is. Berry said that she has been working with the Center for Missing and Exploited Children in D.C. ever since her escape, and no one would argue that she is a passionate advocate whose singularly hellish ordeal has been fuel for her advocacy.

But the Fox 8 crew, mindful of Berry's local fame, could hardly contain themselves as they gushed about the positive feedback on their social media channels. Schaefer told Berry that her presence at Fox 8 would help raise "so much awareness" about the missing persons issue, an issue currently on the minds of local parents after the murder of 14-year-old Alianna DeFreeze.

No doubt. But beyond the fact that it will begin airing soon, details about the new segment were in short supply. Much of the interview, billed as an announcement of and an elaboration on Berry's new role, focused on Berry herself: her family and her daughter (they are happy and healthy); her memories of Seymour Avenue (she tries not go down the path of negativity); and her communication with Gina DeJesus and Michelle Knight (it is ongoing, if sporadic, and rarely about the past).

While the content of the upcoming segment is important stuff, Berry is merely a celebrity being used to brand that potential content. To pretend otherwise is, at best, quaint. It'd be as if Joe Thomas were brought on to host a segment about concussions in sports. This is not necessarily bad — it's true that the celebrity attachment will likely mean greater awareness, and that viewers may value Berry's contributions, given her decade of captivity — but the whole set-up was frankly pretty gross, in part because it's clear Fox 8 knows there is something their viewers value even more than content about missing persons, and that's content about Amanda Berry. This was evident in their 10-second Super Bowl spot Sunday, and in the several teasers during the 8:00 a.m. morning broadcast.

Having Berry "join the team," means Fox 8 will get exclusive interviews for the duration of her contract — not interviews that Berry conducts (it's not like she's a trained reporter) but ones that she sits for. Fox 8 will get to chronicle the next stage of Berry's life as she ostensibly participates in a news segment, a segment that may become more about her than about the region's missing persons.

"You can't have her!" Joked Schaefer, to the cameras (and to the other local news stations). The impression was that Fox 8 had secured a commodity that had been up for grabs. Fox 8 Wins! Fox 8 is the best! Indeed, the interview drifted, finally, into explicit self-promotion (though it had been implicit throughout):

"Tell everyone," Capel instructed Berry, "how much you love us!"