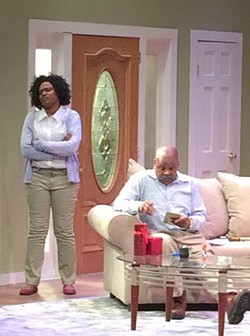 Oddly enough, one of the worst race riots (300 people killed, 35 blocks of businesses and homes destroyed) in our country’s history has become something of a footnote, with many people unaware of what happened. So it is entirely fitting the playwright Nikkole Salter makes the Tulsa race riots of 1921 a central element of her play Repairing a Nation, now at Karamu House. The riots happened in Greenwood, which was the wealthiest African-American community in the nation at the time, and a suburb of Tulsa, Oklahoma.

Aside from its overly earnest title, the play attempts to recapture history by weaving a story about reparations for the riots into a domestic drama involving a black family and the sketchy history of their prosperous janitorial service company. Under the direction of Margaret Ford-Taylor, the cast works hard for almost three hours to loom Salter’s threads of memory into a powerful whole. And while it doesn’t entirely succeed, the play is often compelling and instructive.

Set in 2001, eight decades after the massacre, Anna and Chuck are celebrating Christmas with some family and friends. One of these guests is Lois (spelled Louis in the program), a woman whose own son calls her “loud, rude and uncouth.” And indeed she is, wasting no time in trying to enlist her wealthy cousin Chuck to take part in a class-action lawsuit to secure reparations for the Tulsa riots. Trouble is, Chuck and Lois can’t stand each other and Lois really detests Anna, Chuck’s elegant wife who is always trying to smooth things over.

Lois’ son Seth is also in the house, as is his former girlfriend Debbie, who is a docent at the local Greenwood Cultural Center where they are raising money for a memorial. It’s clearly a volatile mix, and Salter crafts many moments when these people feint and fight each other effectively. It all leads up to the revelation of a family secret that threatens to pull the family even further apart.

As Chuck, Butch Terry bristles with real venom every times he gazes at Lois, while at other moments he is warm and protective of his wife Anna. And Rebecca Morris is supremely comfortable as Anna, a woman who tries her best to calm the roiling waters that surround her. Johnathon L. Jackson and Jameka Terri contribute effectively at times as Seth and Debbie, but one never really gets the sense they were once engaged.

In the linchpin role of Lois, Joyce Linzy misses nary a second in conveying her characters nasty disposition. At times this is quite funny, but her mugging gets a bit too broad at times, tipping the play a bit out of balance.

Since the Tulsa riots are so important to the play, yet still so unknown, it’s too bad that the scenes in the Greenwood Cultural Center are relegated to the aisle in front of the stage, and that T. Paul Lowry’s projected images of that horrific time in 1921 are thrown onto the brick side walls of the theater, substantially reducing their visibility and impact.

Speaking of those walls, this is the last production in this hallowed space before a major renovation begins. So here’s a salute to the talented people who have made Karamu such a valued fixture by working on or around that building. We can’t wait to see what’s in store for Karamu 2.0!