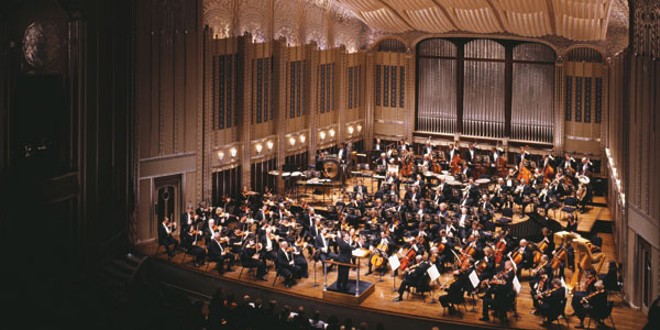 Apollo’s Fire will present five performances of “Virtuoso Bach,” exploring Johann Sebastian Bach’s orchestral music and spotlighting some of its members in solo roles. Oboist Debra Nagy will be featured in his g-minor Oboe Concerto, and the program includes Bach’s first Orchestral Suite and Brandenburg Concertos Nos. 3 and 4. Cleveland’s Baroque Orchestra will cover a wide geographical area with these performances: Painesville on February 16, Cleveland Heights on February 17 and 18, Rocky River on February 19 (afternoon), and Bath on February 20. Tickets are available online.

Another change of plans at Severance Hall: The Cleveland Orchestra is sending Xian Zhang in for the ailing Semyon Bychkov to conduct Tchaikovsky’s rarely-performed Manfred Symphony and Mozart’s Concerto for Two Pianos with Katia Labèque and Marielle Labèque as soloists. Concerts run from Thursday, February 16 through Saturday, February 18, and tickets can be ordered online.

Speaking of conductors, BlueWater Chamber Orchestra is planning to play a whole concert without one on Saturday, February 18 at 7:30 pm at the Breen Center. Concertmaster Ken Johnston will be in charge of keeping everything in focus for Copland’s original version of Appalachian Spring, Wagner’s Siegfried Idyll, and Britten’s Sinfonietta. Buy your tickets online.

William Kanengiser, one-fourth of the famous Los Angeles Guitar Quartet, will make his Cleveland solo debut for the Cleveland Classical Guitar Society at Plymouth Church on Saturday, February 18 at 7:30 pm. His program features both Spanish and North American selections, including music by Frederick Hand, Bryan Johanson, and Brian Head. While the guitarist is in town, the Society will also present a screening of the 1986 film Crossroads, for which Kanengiser served as Ralph Macchio’s guitar coach. That event is free on Friday, February 17 in the Dolan Science Center at John Carroll University, but you’ll need tickets for the recital on Saturday.

The Rocky River Chamber Music Society will present the Factory Seconds Brass Trio, Jack Sutte, trumpet, Jesse McCormick, horn, and Richard Stout, trombone, in a free concert on Monday, February 20 at 7:30 pm at West Shore Unitarian Universalist Church. The performers, all second-chair members of The Cleveland Orchestra, will play the world premiere of David Loeb’s Madrigaletti, plus music by J.S. Bach, Paul Hindemith, Norman Sherman, Robert Marek, and Václav Nelhýbel. Have kids and no plans on Saturday morning, February 18? The Trio will entertain and engage them with a free 11:30 am concert in the same location. That program features Francis Poulenc’s Sonata, along with storytelling, audience participation and artwork. The 45-minute performance is appropriate for ages 3 and up.