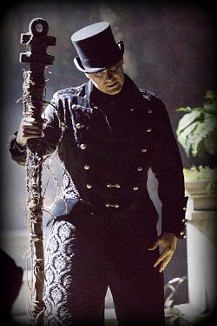 In 1996, Ed Douglas [pictured] launched his career with a straight-to-video film. In the process of making the movie, he discovered that he liked doing the music for the soundtrack more than the actual filming, so he joined up with local multi-instrumentalist Gavin Goszka to form the local Goth act Midnight Syndicate, which released its self-titled debut in 1997.

The group has been going strong ever since.

Every October, haunted houses, amusement parks, television and radio shows, restaurants use the band’s music as part of their Halloween programming. In 2014, the group put on a live stage show at Cedar Point.

“We’ve developed a new, even better show that we can’t wait to unleash on audiences,” says Douglas in a press release. “Our new venue, the Jack Aldrich Theater, is a perfect fit for what we want to do. It will allow us to create an intimate and thrilling experience that guests won’t soon forget.”

“Working with Cedar Point in 2014 was a great experience across the board, so to be able to team up with them again, especially as a part of Midnight Syndicate’s 20th anniversary celebration, is perfect,” adds Goszka.

“We’re excited that Midnight Syndicate is bringing their live and immersive stage show back to Cedar Point this fall,” says Charles Bradshaw, V.P. of Live Entertainment at Cedar Point. “Fans of their mesmerizing music loved their previous run at HalloWeekends – and they’re going to love this latest production.”