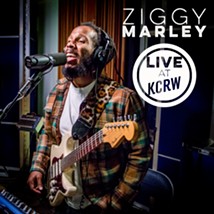 An Emmy winner, author, philanthropist and reggae icon, Ziggy Marley, the son of the late, great Bob Marley, has just announced a 2017 summer tour in support of his 2016 self-titled album, which was recently won a Grammy for Best Reggae Album.

He plays on July 3 at Hard Rock Live.

This past fall, Marley also released his first cookbook, Ziggy Marley and Family Cookbook. Inspired by the Jamaican meals Marley ate while growing up, it features a variety of contributions from family members, including Ziggy’s wife Orly, his sister Karen and his daughter Judah. We assume he'll have copies of it at the merch booth when he plays here.