Punk Rockers Against Me! to Play House of Blues in October 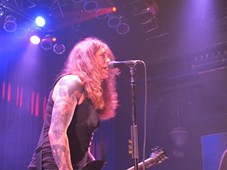 Plenty of punk bands have succeeded purely because they bring the noise. Against Me! does that and the some. Much like the Ramones and the Clash, the band has left its mark because of the great songs it writes.

Three years ago at House of Blues, the group kicked off the Alternative Press Music Awards with an invigorating show that really got the mosh pit going. We still consider the band's tune “I Was a Teenage Anarchist” to be one of the great punk anthems of all time.

Now, in the wake of opening some dates for Green Day, the band has just announced a tour in support of its new studio album, the highly personal Shape Shift With Me.

“Tons of people have written about love. But while love is cliché, it’s infinitely relevant,” says singer Laura Jane Grace in a press release announcing the tour. “For me, having always been in a punk band that was expected to be political, I never felt like I had that option to write about feelings in that way. That’s what I ended up being drawn to this time. It’s writing in a way I thought I could never write before, and not giving a shit about expectations.”

Grace wrote the songs on the album, a loose concept album about traveling the world, from what she calls a “trans perspective.”

“There needs to be more records about trans rights and everything like that, but feeling like I already did that, I wanted to move on to write commentary on living from a trans perspective,” she says. “I wanted to write the transgender response to the Rolling Stones’ Exile On Main Street, Liz Phair’s Exile In Guyville and the Streets’ A Grand Don’t Come For Free.”

The group plays House of Blues on Oct. 4.

Tags: Against Me!, House of Blues, Image

Speaking of Against Me!, House Of Blues