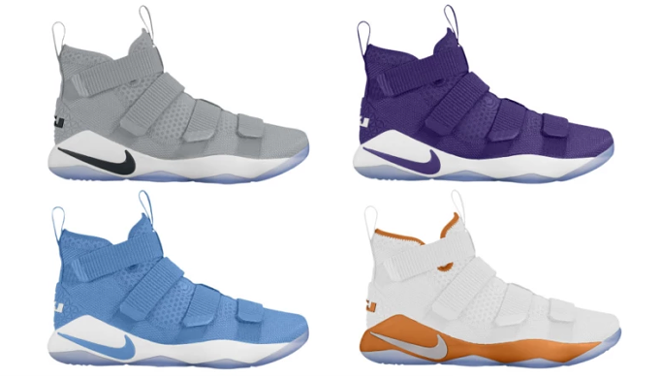 Kyrie still wants out of Cleveland and the Browns just named a dude who was supposed to be released or traded as the starting quarterback for the first preseason game. But fear not Cleveland, we still have that LeBron James guy. And Nike is releasing LeBron's sneakers in droves, just in time to buy those fresh back-to-school kicks.

The Soldier XI are LeBron's high-top sneakers — he always releases a high-top soldier, mid and a low version of a shoe at the same time — and the Soldiers first drop before the playoffs each season. The Soldier XI hasn't been as popular as the Soldier X, which had an enormous rise in sales as LeBron primarily wore that sneaker during his 2016 Championship run.

The 20-plus colorways that are now being released come mostly in solid colors, with a synthetic mesh upper. The upper of the sneaker comes usually above a white midsole, but that changes on some of the colorways. While this is a significant drop, it's just the first part of the release, and you can expect a significant amount of even more colorways soon. The sneakers can be found at Nike retailers like Eastbay and Finish Line.

In other LeBron sneaker news: Nike is releasing the second retro LeBron sneaker. This past January, Nike released a LeBron retro for the first time by putting out the Air Zoom Generation (AZG), LeBron's first signature sneaker,
click to enlarge

from all the way back in 2003. The AZG came in the popular white and red colorway, but this time, the shoe will be released in a currently unseen black colorway. Expect that to drop in October.