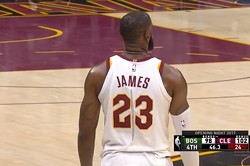 After a long-standing contract with Adidas, the NBA chose Nike to produce this year's official team jerseys. The Cavaliers were included in this switch. Most teams got dramatic makeovers to t he style and look of their jerseys, and the look of the Cavaliers uniforms were overhauled, to mixed reviews.

But the look of the jersey isn't the only thing that was changed. Nike's jerseys have now ripped a number of times, something that shouldn't happen in an NBA game. In the season opener versus Kyrie Irving and the Boston Celtics, LeBron James' jersey was ripped down the middle, right between the numbers.

Then, this past Sunday, frustrated with his play against the Atlanta Hawks, Cavaliers' center Kevin Love ripped his jersey after he was taken out of the game. This isn't something that happened with Adidas' jerseys.

Not only have the jerseys easily ripped, they show the players' perspiration much more than previous jerseys. After a few minutes of playing, most of the Cavaliers wine-colored jerseys look as if they just came out of the washing machine.
Unsurprisingly, Nike, which signed an 8-year, $1 billion deal with the NBA before the season, released a statement to ESPN today saying they will be redesigning the jerseys so they don't rip.

"We are very concerned to see any game day tear and are working to implement a solution that involves standardizing the embellishment process and enhancing the seam strength of game day jerseys," Nike said in a statement. "The quality and performance of our products are of utmost importance and we are working with the NBA and teams to avoid this happening in the future."