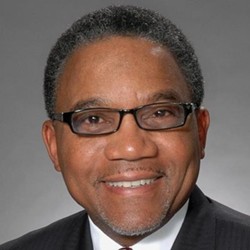 Days before the 2017 general election, reports emerged of allegations that Michael Nelson, the former NAACP Cleveland chapter president and candidate for a judicial seat on the Cleveland Municipal Court, had raped a 46-year-old woman, a former romantic partner. Her police report chronicled a violent October assault.

Despite the publication of the report, Nelson went on to win his race, unseating incumbent Michael Sliwinski. Sliwinski was adamant, in conversations with Scene, that neither he nor his team had unearthed the rape allegations, or pushed them to the media, as part of opposition research. Nelson began his term in January.

Last week, it was reported that a Cuyahoga County grand jury declined to pursue charges against Nelson. It's unclear when this "no-bill" was handed down, but the grand jury made its decision following an investigation by the Ohio Bureau of Criminal Investigation, who took over the case from the Cleveland Police Department in December.

Back in November, Nelson had called the rape accusations a "political hit." The police reports, however, describe the assault in detail (though key fragments were redacted). They also describe pressure on the accuser to remain silent applied by Nelson himself, his wife, and members of his church.