Here's the Schedule for the 7th Annual Accidental Comedy Festival

The 7th Annual Accidental Comedy Festival is just around the corner, and Scene has got the exclusive look at the schedule for the five-day extravaganza. Taking place at Hilarities at Pickwick and Frolic downtown. Comedians from your favorite films and television shows are performing alongside some of Cleveland' best and funniest, making this year's line-up an absolute can't miss. Ticket prices begin at $10 and cap out at $20.

WEDNESDAY - AUG. 29
The show kicks off with headliner Liza Treyger at 8 p.m. on the mainstage with Cleveland's Jimmie Graham serving as host.

On the cabaret stage, Joshua Morrow will host a Ha-Ha-Happy Hour Showcase marathon from 6 p.m. until 9 p.m. when Alan Cox Show co-host Bill Squire will headline with John Bruton as host.

Headlining the mainstage at 8 p.m. is NBC's winner of Last Comic Standing, Clayton English, with Mary Santora serving as the host.

The cabaret stage has another Ha-Ha-Happy Hour showcase, this time hosted by Cody Cooper from 6 p.m. until 9 p.m. when comedian Jim Tews headlines with Jimmie Graham hosting.

The festival flies into full swing on Friday with a 7:30 p.m. headline performance from Atlanta comedian Joyelle Johnson with Cleveland's John Bruton hosting the show.

The second headline show of the evening is actor/comedian Sean Patton at 10:30 p.m. and Joshua Morrow as host.

The 6 p.m. Ha-Ha-Happy Hour showcase is hosted by Jimmie Graham on the cabaret stage until Mary Santora hosts the 9 p.m. headline performance of Nore Davis.

The festival takes over downtown on Saturday beginning with a live recording of Doug Benson's 'Doug Loves Movies' podcast at 4:20 p.m. featuring some surprise special guests.

The ridiculously funny Debra DiGiovanni takes over the mainstage at 7:30 p.m. with Cody Cooper serving as host and at 10:30 p.m., Billy Wayne Davis from Last Comic Standing headlines the mainstage along with Mary Santora hosting.

The cabaret stage starts at 6 p.m. with the Ha-Ha-Happy Hour showcase, this time hosted by John Bruton. Curtis Cook takes the reigns as headliner at 9 p.m. with Jimmie Graham hosting.

Late into the night, Amy Miller headlines the cabaret stage at 11 p.m. hosted by Joshua Morrow. 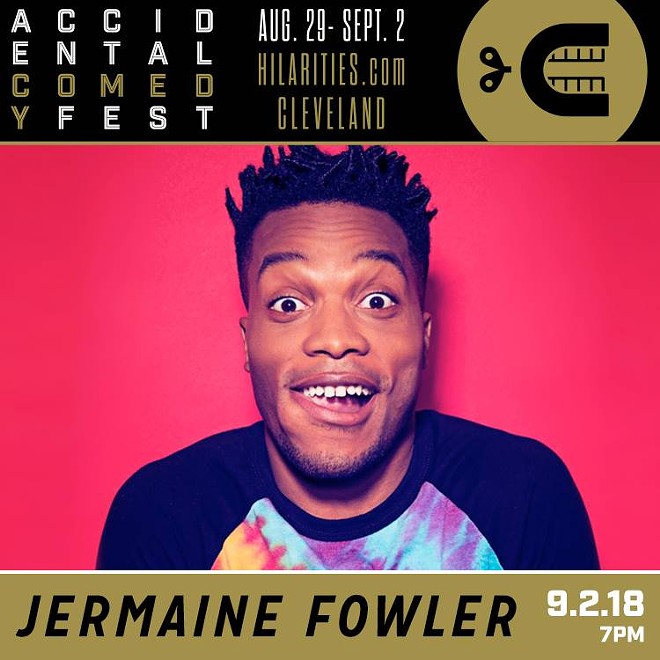 Closing out the festival is another live podcast recording, this time presented by 'Cumtown,' again at 4:20 p.m.

Star of Sorry to Bother You and Superior Donuts, Jermaine Fowler headlines the mainstage at 7:30 p.m. hosted by John Bruton.

Tickets for Accidental Comedy Fest can be purchased here.