Via reporting from The Chronicle, the Avon Lake home of former Cavaliers point guard Jose Calderon has been burglarized. Avon Lake police reported that a white 2017 Jeep Wrangler had been taken, along with a Chanel watch, a Prada handbag, an Xbox One S, an iMac and a pair of Louis Vuitton shoes.

Calderon signed a one-year-deal with the Detroit Pistons early last month. And though he's taken his considerable talents to Motown, he clearly hasn't taken all of his things. A Lake Road neighbor who had been watching the home in Calderon's absence noticed that the garage and kitchen doors were both open and notified the police in late July.

The burglary occurred between July 21 - 25, police estimate, and the vehicle was recovered undamaged in Youngstown.

Calderon's six-bedroom, seven-bathroom home — which is currently for sale for $3.5 million — includes an indoor basketball court, an in-ground pool, and exquisite lake views. (It's way nicer than Kyrie's, honestly, as mansions go.)

Calderon is not listed as the buyer of the Avon Lake home, but police noted that the burglary occurred on the 31000 block of Lake, and this one's the only home for sale on the block that was purchased last year, a week after Calderon was signed by the Cavs in July. (The other four homes for sale were purchased in 2004 and 2005.)

You can check out the home listing, and scroll through the pics right here. 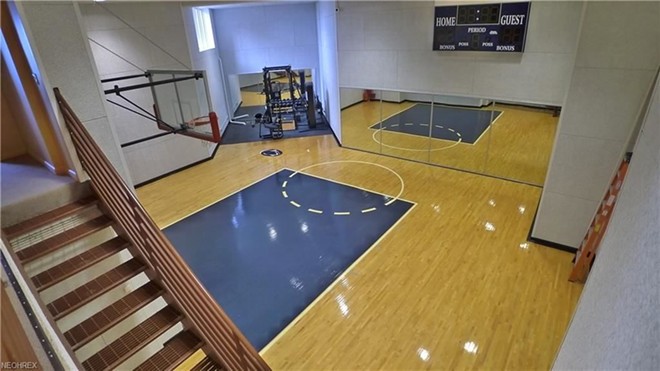