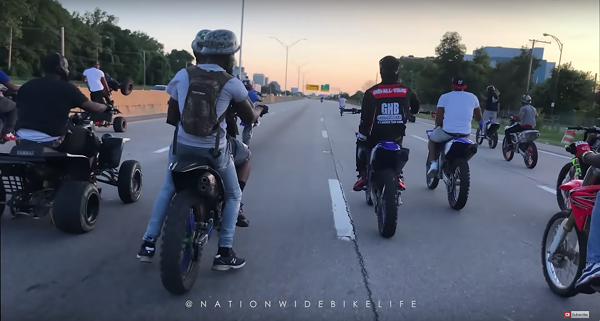 Nationwide BikeLife, a group of traveling dirt bike stunt riders, uploaded a video to YouTube Monday depicting riders roaring down the Shoreway from the east side of Cleveland, all the way along Clifton Blvd. to Rocky River.

On Sunday, more than 100 ATV and dirt bike riders ambushed Cleveland and the west suburbs, with police cars following in tow. As of yesterday, investigators were still unsure of how the riders knew each other or why there were so many, but yesterday's uploaded video seems to answer those questions.

While the 23-minute long video doesn't date the ride, it does reference a "Cleveland Rideout." Additionally, the Nationwide BikeLife Instagram page showed a clip from Fox 8's coverage of the biking ambush, mentioning #legalizewheelies, leading many to suspect they're the culprits of Sunday's invasion (unless there's another group of 100 or so dirt bike and ATV riders that showed up in Cleveland this weekend we don't know about).

"This battle so was vicious. Dirtbikemanny & Showoutboyzru wheelie for 28min nonstop for $2k cash and a brand new 85cc. Leave a comment! Who won? Which of these two riders has the highest skill level? Who would you put your money on!?!? We didn't catch the end of the battle due to some battery issues, but the Cleveland Rideout was lit! Riders from all over the country came together to show off and show out."

You can check out the full video below.