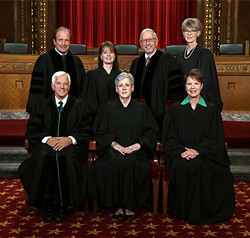 The Ohio Supreme Court will decide on an issue that has far-reaching implications for how victims can collect monetary judgments against police officers in civil trials.

David Ayers spent 11 years in prison after being wrongfully convicted of killing a 76-year-old woman in 1999 in a CMHA high-rise where he worked as a security guard. He was sentenced to life without parole but won his exoneration after pubic hairs found on the victim's body failed to match his DNA. His lawyers also proved that the two detectives who worked the case — Denise Kovach and Michael Cipo — made false statements in search warrants, forced a friend of his to sign a false affidavit and generally "conspired to violate [Ayers'] civil rights," as an appellate judge would note in 2013 when Ayers brought a federal lawsuit against them.

In that trial, which ended with the jury awarding a $13.2 million judgment, the detectives were represented by lawyers from the City of Cleveland law department.

In a typical case where a city employee has been slapped with a civil lawsuit, the Ohio Revised Code dictates the municipality has the "duty to defend" the employee as long as they were "acting both in good faith and not manifestly outside the scope of employment or official responsibilities." So too with indemnification: If the employee meets those two requirements and is found liable for a civil judgment, the law says the city indemnifies — or picks up the tab.

But rather than indemnify per state law in that case, the city of Cleveland paid for the officers to enter bankruptcy — paying not only for their legal representation, but for their filing fee.

Cipo died in 2013, but Kovach's bankruptcy sailed through the courts, listing the $13.2 million judgment as a debt but not indicating that she had the right to indemnification for the amount. And with that, Ayers' hard-fought slice of justice was wiped away.

"This provides a road map for any municipality that wants to evade their obligations," Ruth Brown, a Chicago attorney who represents Ayers told us in 2016 for a Scene feature on what one veteran civil rights lawyer called a "wrong, immoral, disingenuous and unethical" bit of dubious legal jujitsu on behalf of the city. "We fully expect that if Cleveland is allowed to get away with this, they will try this again."

David Leneghan, the bankruptcy attorney secured by the city on behalf of Cipo and Kovach, told Scene in 2016 that, "David Ayers' right to seek payment from my client's employer existed both before and after bankruptcy — there was no interference with that. Bankruptcy just means that my client will not have to be personally liable, nor have to personally pay, the Ayers judgment. I have repeatedly stated on the record that it appears that David Ayers waited too long, more than two years, before filing his lawsuit for indemnification, which, in my opinion, is beyond the statute of limitation period for a claim for statutory indemnification in Ohio."

Ayers took the issue to court that same year, and Cuyahoga County Common Pleas Judge Robert McClelland ruled that Cleveland had to pony up the payment, saying that plaintiffs, as well as defendants, have a right to ask a municipality to indemnify.

But t hat was appealed by the city, and the 8th Ohio District Court of Appeals reversed McClelland's order in a 2-1 ruling that said it was on the employee to seek indemnification from their employer, not the right of the plaintiff.

Ayers' legal team appealed to the Ohio Supreme Court, which ruled 4-3 this week that it would hear the case.

The effects are far-reaching, not only for Ayers and other victims seeking justice from cops and cities in civil trials (or any state actor, for that matter), but also for employees. "Requiring an employee to ask for indemnification is a disservice to the employee, as it can make their work environment worse," Brown told Cleveland.com.