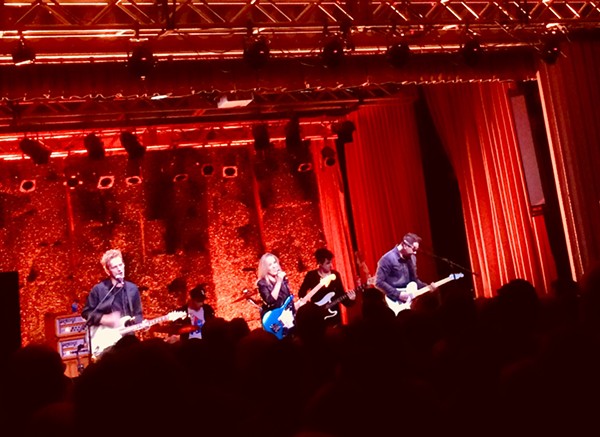 There was a splendid simplicity in the room last night, a catharsis. Against a wall of strobe-lit foliage and a lighting rig that looked like nighttime fireflies, Liz Phair brought her "Amps on the Lawn" tour to Cleveland, and it felt like a throwback to more vulnerable times, in a pure sense of the word, and more fun times.

The tour comes as Matador releases a 25th-anniversary retrospective of Phair's landmark Exile in Guyville, and the Cleveland show was riddled with great picks from that album. The "Never Said" into "6'1"" into "Help Me Mary" stretch was a fine example. The sold-out crowd made sure that she knew how beloved her earlier work remained.

Phair's Oberlin College alumna status ('90) kept coming up throughout the night, often via the zealous audience. At random intervals between tunes, folks would shout "Oberlin! Oberlin!" as though it were birdsong. Phair mentioned that it had been on her mind, and said that the whole evening had a sort of "Ohio-rural" vibe. There was a darkness in the air, evincing the best and most emotional of her songwriting and capturing a certain nostalgic solitude that comes with particular key moments in life (evoking, say, the haze of college years and lost romances).

While she was on the subject, telling the audience, "I like it cold," Phair and the band dropped into the rarity "Blood Keeper." The red lights blended viciously with the heavy chords on this one, and it was a definite highlight.

Throughout the night, Phair's backing band was quite good, too. Her classic lo-fi sound translated well to the players, feedback and all.

It'll never not be interesting: seeing a show after listening to a band's studio stuff for years. I spent a lot of time with those early Liz Phair albums in college, especially. Seeing those tunes in their fuller forms onstage last night was awesome; this was a heavier show than I'd expected, louder and more enthusiastic than the albums from 20, 25 years ago might seem.

With the Amps on the Lawn vibe in full effect (the tour tagline is Make America Girly Again, with White House imagery on some of the promo materials) and the retrospective feel of the show, this was a much-needed release of energy and groove.

Phair opened the show with "Flower," which is about as subversive and raunchy a lullaby as you'll find this side of de Sade. The audience was enthralled from the jump, in on the joke and passionately pleading for more as the rowdy night rolled on.