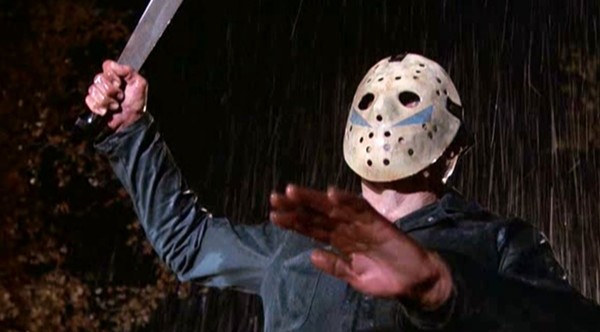 LeBron "King" James and his Springhill Entertainment are currently in talks with Vertigo Entertainment to get a reboot of Friday the 13th off the ground. Yes, as in the horror franchise featuring Jason Voorhees hacking up co-eds at a summer camp while wearing a hockey mask.

"After Halloween’s mega $70M+ opening this past weekend, a new Friday the 13th is a no-brainer," Bloody-Disgusting's Brad Miska wrote. "Especially when you consider James’ popularity combined with the massive horror experience of Vertigo, who was behind last year’s Stephen King adaptation of IT, as well as The Ring, The Strangers, and The Grudge."

For those unaware, LeBron James claims to be a massive horror fan, particularly the Friday the 13th films, going as far as releasing blood-spattered themed shoes. Last year, James donned a screen-accurate Pennywise the Clown costume for Halloween, serving as the ultimate nightmare fuel for anyone scared of a 6'8" killer clown.

The talks are still early but if James does sign on, at the very least, we'll know the producer is a true fan. Fingers crossed he brings the production to Cleveland.