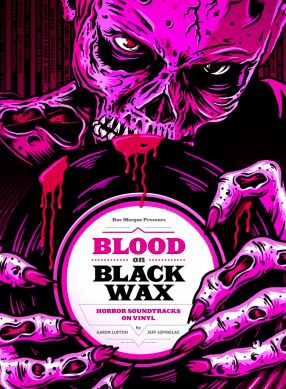 The locally based 1984 Publishing has just announced that it plans to release Blood on Black Wax: Horror Soundtracks on Vinyl, a book about the best horror movie soundtracks. The publisher worked with the Toronto-based horror periodical Rue Morgue on the tome, and the hardbound, full-color, 240-page book includes images of the intricate (and often rare) artwork on the LP sleeves, as well as album reviews, release details and “wild backstories.”

"I still remember with fondness coming across a copy of John Carpenter's Escape from New York in San Francisco, and discovering the first Death Waltz reissue Zombi 2 in Las Vegas," says co-author Aaron Lupton, Rue Morgue’s music editor, in a press release about the book. "With so much excitement out there today over beautiful reissues, colorful variants, and increasingly rare original pressings, I thought it was time to create a book that would bring this obsession to dramatic, vibrant life."

The book includes sections on horror movie soundtracks such as A Nightmare on Elm Street, Friday the 13th, Jaws, Halloween and The Exorcist, to name a few of the titles discussed.

Lupton and his co-author Jeff Szpirglas, who's also a Rue Morgue writer, interviewed composers such as John Carpenter, Fabio Frizzi, Christopher Young and Harry Manfredini. Mick Garris, who directed The Stand and Sleepwalkers, wrote the foreword, and composer Christopher Young, the man behind Hellraiser and the new Pet Seminary remake, contributed the afterword.

"I've been rabidly listening to and collecting soundtracks since buying Return of the Jedi in 1983, but working on Blood on Black Wax has been the apex of this fan obsession," Szpirglas says. "Over a year was spent sorting through cool covers, and listening to hours of the most insane and freakish soundscapes to curate this book."

Available on April 13, the limited Record Store Day signed edition comes with a 7-inch single featuring rare compositions by Paul Zaza (My Bloody Valentine) and Carl Zittrer (Black Christmas). It features "Prom Night" and "Love Me Till I Die," two previously unreleased disco tunes featured in pivotal scenes of the 1980 cult classic Prom Night. Pressed on red wax, the release also features exclusive artwork by noted artist Gary Pullin. That release is limited to 1,000 copies in the U.S. and 200 in Canada and will be available only at indie record shops in both countries.

Then, on May 13, an exclusive version of Blood on Black Wax featuring a limited-edition 12-inch vinyl pressing of the full Prom Night soundtrack cut at 45rpm will come out.

The special Record Store Day edition of Blood on Black Wax retails for $39.95, and the base book sells for $34.95. The soundtrack edition (and pricing) will be announced soon at 1984Publishing.com.