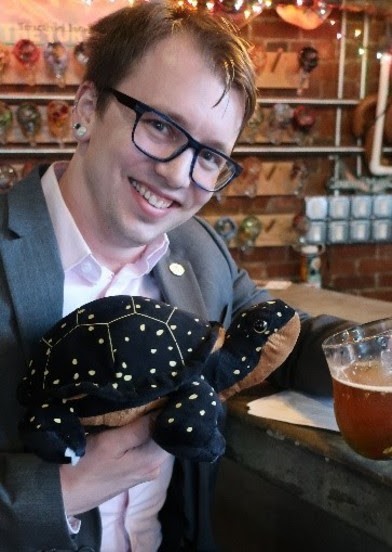 Declining water quality, loss of wetlands habitat, natural predators and illegal poaching have threatened spotted turtles in Northeast Ohio. The Greater Cleveland Aquarium's Splash Fund and SPOTD, a collection of regional environmental and educational agencies, have teamed up to try to save the creatures.

Last year, Terrestrial Brewing Company joined the effort. The local craft brewer donated proceeds from the sale of a special brew to the cause and raised $5,000 in the first year of the partnership.

“We see this Terrestrial partnership not only as a way to raise funds, but as a way to engage the community and increase awareness of the factors that can cause a species to disappear from its natural habitat,” says Greater Cleveland Aquarium GM and Splash Fund Director Stephanie White in a press release. “This year, the Aquarium celebrates its second release of headstarted hatchlings back out into their natural environment as part of efforts to boost populations and help conserve this threatened species.”

From 6 to 9 p.m. on Thursday, Oct. 17, Terrestrial will host a free Consume & Conserve Friendraiser to provide updates on the efforts to boost and monitor spotted turtle populations in Northeast Ohio. There will be a raffle, and attendees can help the cause by purchasing a spotted turtle plush, ordering a limited edition Save the Spotteds T-shirt or just buying a pint of Terrestrial’s I Am Still Saving the Turtles IPA.