Sixth Annual Touchdown For Hunger to Take Place on Nov. 17 at the Greater Cleveland Aquarium 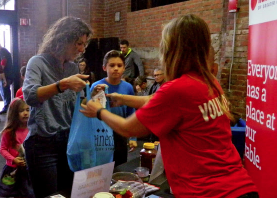 “We are excited to once again team up with the Hunger Network to make a difference for families in need in our community,” says aquarium GM Stephanie White in a press release about the event.

Last year, the one-day event brought in nearly 500 non-perishable items and $1,000 in donations. The donations help out about 40,000 individuals each month.

“We are grateful for our longstanding partnership with the Greater Cleveland Aquarium to increase community engagement and raise awareness about the ongoing need to relieve hunger in Cleveland,” says Hunger Network CEO Jennifer Scofield. “These opportunities make it easier for everyone to make a difference for our neighbors in need.”

The Browns play that week on Thursday, Nov. 14, so the event doesn’t pose a conflict for Browns fans.