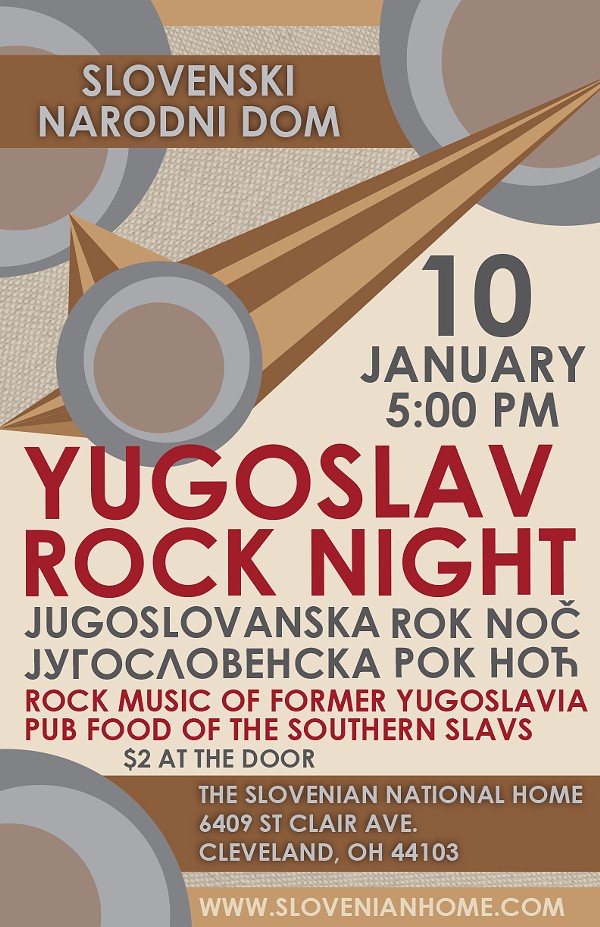 At 5 p.m. on Friday, Jan. 10, the Slovenian National Home will host a special Yugoslav Rock Night (that translates into Jugoslovanska Rok Noč in Slovenian and Југословенска Pок Hоћ in Serbian) and will feature pub food from the South Slavic countries (Bosnia, Croatia, Macedonia, Montenegro, Serbia, and Slovenia).

Local DJ Stanislav Zabic, who hosts a music-related podcast, will play rock music produced in Yugoslavia between 1962 and 1991.

Zabic, who was born in 1973 in Yugoslavia but moved to the States in the 1990, says he was always surrounded by music while growing up.

“Rock ’n’ roll is very important in Yugoslavia for everyone born after 1945,” he says one night over drinks at the Whiskey Bar in Cleveland Heights. “The Beatles and Stones became popular in Yugoslavia in the 1960s, and garage rock bands followed. In the 1960s, bands started writing their own material. Prog rock became popular in the 1970s, paralleling what was going on in the West. And then everything exploded with punk rock.”

Zabic started collecting records when he was a teenager. He lost much of his collection when war broke out in Yugoslavia when he was 18.

“I lost about two-thirds of my collection if not more,” he says. “Someone came into our house and stole them, but I still have some records that my dad collected from the debris.”

In advance of Yugoslav Rock Night, Zabic provided us with a list of what he describes as “ten Yugo rock bands you need to hear before your country falls apart.”

“Yugoslovia was still a socialist country, but Yugoslavia society was really fertile for rock ’n’ roll,” he says. "The music industry — record labels and shows — was completely operating on a market economy level in a socialist country. The record business was very important and run very seriously with traveling salesman going to different towns to try to sell records."

Here’s his list of essential Yugoslavian rock bands and his description of each act.

Lyrically one of the strongest bands. After the band released a string of successful albums in the ’80s, their leader, Branimir Johnny Štulić, left his hometown of Zagreb and moved to Netherlands refusing any contact with the general public as form of a personal protest against the Yugoslav dissolution.

Throughout the years, this band from Sarajevo is locally the most popular band with a musical style that morphed from arena hard rock to new wave and ethnic rock. With albums still in print, they sold millions of records to the Yugoslav audience.

This all-female band coming out of the Novi Sad conceptual art community played a uniquely rhythmic and guitar heavy version of rock with lyrics that contain a uniquely defiant, yet feminine view of the world.

This ’70s avant-garde band from Ljubljana always provoked many generations of Yugoslav youth to think beyond the box with their unique music style, and sarcastic, humorous lyrics.

New wave band with a provocative name created music which appears to be the most accessible to the musical taste of Clevelanders, especially their all-cover album Les Chansones Populaires from 1983.

Hailing from a little town of Trbovlje in Slovenia, this band is best known for its outrageous totalitarian image and industrial beat covers of Beatles, Stones, Queen and Sound of Music. It is the best-known Yugo Rock export.
Leb i sol

Coming from the most Southern corner of Yugoslavia, this band from Skopje is the most shining example of Yugoslav prog rock. With their intricate guitar solos and odd time signatures on drums they are the most uniquely Yugoslav band on this list.

One of the first and most influential punk bands from Rijeka that recorded one punk album and two post-punk albums. North Ohio listeners will be amused with their song “Perspektiva,” which is an ironic tribute to Devo.

As a direct opposition to the new romantic movement in England, Sarajavo artists in the ’80s formed new primitives movement that included several strong bands (with Z.P. being the most popular), influential comedy show with three seasons on national TV and a powerful college radio station.