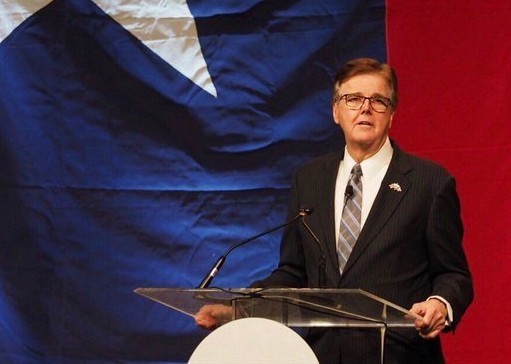 In times of crisis, some public servants step up while others fall apart. We'll leave it up to you to decide which better describes Lt. Gov Dan Patrick.

Patrick, a former right-wing radio host, told Fox News Monday night that "lots" of grandparents are willing to die in the COVID-19 pandemic so they can ensure a better economy for their grandchildren.

"No one reached out to me and said, as a senior citizen, are you willing to take a chance on your survival in exchange for keeping the America that all Americans love for your children and grandchildren?" Patrick, 70, told host Tucker Carlson. "And if that's the exchange, I'm all in."

He added: "I just think there are lots of grandparents out there in this country like me — I have six grandchildren — that's what we all care about. ... I want to live smart and see through this, but I don't want the whole country to be sacrificed. And that's what I see."


Dan Patrick with a white hot take on Tucker Carlson that boils down to “trust me, old people are willing to die for Wall Street” pic.twitter.com/xwZOZ1x3T0

Patrick's remarks came after a Monday briefing by President Trump in which the reality show commander in chief said he might ease social distancing to lessen damage to the economy. Such an action would defy public health experts who warn that without efforts to flatten the curve of infections, the medical system could collapse.

Patrick not only seem to disregard the recommendations of those same health experts but also the scientific reality that the disease doesn't just pose a risk to the elderly. According to federal research, up to a fifth of infected people in the 20-44 age range have been hospitalized — some in intensive care units.