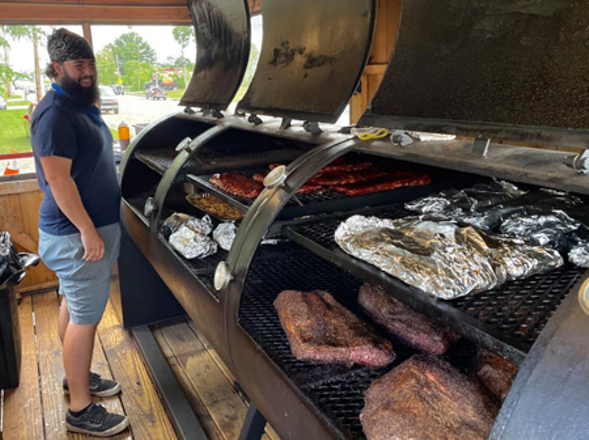 A little before noon on Fridays, Saturdays and Sundays, a small gravel parking lot in rural Brimfield Township begins to fill up with cars. Gradually, a line forms in front of a rust-colored food truck with a handwritten paper menu taped to the front of it. At 12:30, the window goes up, signaling the start of another busy lunchtime rush. By 3 or 4 p.m., that little red trailer on a dusty corner parcel will have dispensed 600 to 800 pounds of barbecue.

“We’re out in the sticks,” says Joe Menendez of Joe’s Barbecue. “All our advertising is word of mouth. The quality speaks for itself. I think I make the best brisket in the state.”

A few yards away from the boxy food truck is where the magic happens. Shoehorned inside a wood-sided trailer on wheels is a 1,000-pound offset smoker that leaves little room for anything except Menendez. The cooker, fabricated from a discarded propane tank, is the design favored by many of the country’s best pitmasters.

The entire experience is as close as a diner around here can get to enjoying Central Texas barbecue. From the roadside trailer and open-air cooker to the slow-smoked meats, long lines and daily sell-outs, Joe’s Barbecue would feel right at home in Austin. That’s no coincidence given that Menendez developed his appreciation for the craft while attending school in that city.

“I wanted to be a video editor, but that didn’t work out,” he says. “I ate at all the great barbecue spots, so I knew what the good stuff was.”

Identifying great barbecue is one thing; mastering it in quantity on a consistent basis is another. Menendez has been working this corner since late 2017, when he started selling ribs from beneath a pop-up tent. His parents own the property, so he was able to invest in new equipment and expand the offerings. Along the way he added brisket, pulled pork, half chickens and turkey breast to the mix. He upgraded to a 500-gallon smoker and purchased the food truck, allowing him to move sales and prep out of the cooking trailer.

“By the time I built this trailer we were selling out of all our food in an hour,” he says without a hint of ego. “Selling out every day is a good thing and a bad thing. The reason we sell out is because all of the food is made fresh every day. We don’t reuse stuff; we don’t freeze stuff. If I’m not selling out, the food goes to waste. If it goes to waste, we have to pay for it and that gets really expensive.”

Menendez really is making some of the best brisket in Ohio – or in Texas for that matter. Like his Central Texas brethren, he is a purist, using nothing but salt, pepper and smoke from a carefully tended fire to transform an unforgiving cut of beef into succulent, drippy, bendy meat gilded with jet-black bark. Those cook for about 14 hours, joined in the pit at various times by the other meats, all of which achieve peak flavor and texture. A typical day for Menendez and his small team begins at 6:30 a.m. when he ignites the fire and ends around midnight when the last of tomorrow’s briskets are lifted out of the smoker.

The menu features meats like brisket ($20), pulled pork ($14) and sliced turkey ($12) by the pound, whole racks of ribs ($22) and half chickens ($8). Sandwiches are stuffed with a half-pound of brisket ($9) or pulled pork ($7). At prices like those for quality like this, it’s no wonder Joe’s flies through product. Menendez’ sides are no mere wallflowers, starring smoked macaroni and cheese ($3, $5), buttermilk bacon potato salad ($3, $5) and charro beans ($3, $5), a thinner version of baked beans larded with brisket. Two housemade desserts, a creamy banana pudding with shortbread cookie ($5) and cheesecake topped with graham cracker dust and seasonal fruit, round out the offerings.

The obvious question one poses to Menendez is if and when and how he plans to expand his red-hot business. His quick-fire answer is that it will happen when he is able to do it without sacrificing control and quality. He intends to add Thursday hours sometime this summer, with Wednesday likely to follow.

Is a casual Texas-style BBQ joint in his future plans?