The Foo Fighters Dazzle at Intimate, Sold-Out House of Blues Show Ahead of Rock Hall Induction 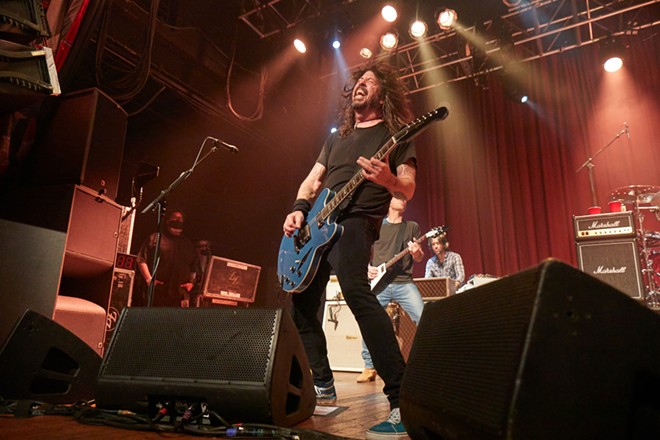 The last time Dave Grohl was at a Cleveland music venue as small as the House of Blues, it was probably in the mid to late 2000s when, while in town for a show, he popped by the Beachland Ballroom as a fan to see The Sounds. (Surely someone who was also at that concert has a better memory than this addle-minded writer and knows the exact year.)

By that time, the Foo Fighters were already an arena band, midway through a career has landed them an induction into the 2021 Rock Hall class this weekend.

The band, like Green Day six years ago, played a sold-out, cozy show at the House of Blues a few days ahead of their big night.

"We're used to playing cold arenas," Grohl said in between early songs last night in front of a crowd packed shoulder to shoulder from the pit all the way to the back stairs. "And around 50, 60, 70 thousand people. But this is nice. This is nice."

The novelty of seeing a band used to selling out stadiums thanks to two decades of mega-hits was half the fun, with the Foo Fighters bringing every ounce of energy that makes those 70,000-seat shows feel intimate to an actually intimate venue.

Grohl and company ripped through a tight two-hour setlist that has been featured on their tour this year, 27 years after the band recorded its debut album.

Sadly, they didn't dig out anything from that record last night, but they delivered plenty of deep cuts alongside the massive hits — for the "old-school fans," Grohl said. "I see you 50 year-olds out there" — and three covers, The Who's "Young Man Blues," The Bee Gees' "You Should Be Dancing," and Queen's "Somebody to Love," on which Grohl took over on drums while Taylor Hawkins did his best Freddie Mercury. (Watch "You Should Be Dancing" below.)

It was, to borrow Grohl's description, nice, and bound to be one of those "you had to be there" shows destined to be talked about for years.