In Advance of Saturday's Show at the Agora, Caamp's Evan Westfall Talks About Band's Love for Ohio 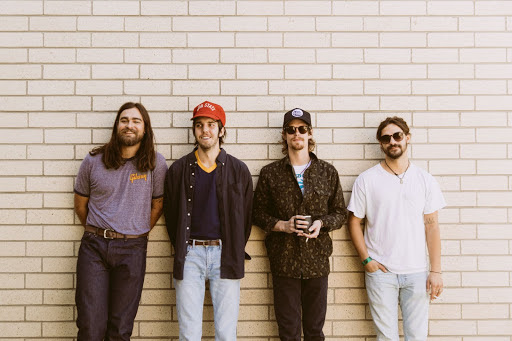 “What initially inspired the CAAMP sound was Ohio — everything about it,” says Evan Westfall, in a recent phone interview. Westfall plays banjo, electric guitar, drums, and percussion, and he provides harmony vocals for the Ohio-made folk band that’s set to perform at 8 p.m. on Saturday at the Agora.

Westfall knew he wanted to be a musician when he first saw School of Rock as a child. He learned his first few chords from his middle school music teacher, and from there, he continued to challenge himself.

The initial seeds for the band’s Lumineers-style music were planted when they bonded over the Remember the Titans soundtrack in class and began going to each other’s houses to play music after school.

In 2012, the pair were split up when Meier moved southeast to Athens, OH to study at Ohio University while Westfall stayed in the Columbus area and attended community college.

For three years, they kept in touch, sending ideas back and forth until Westfall decided to make the move to Athens, so that the pair could prioritize their music. Meier had been playing regular open mic gigs at the popular Athens bar/restaurant Casa Neuva, and Westfall was eager to join him.

“I wasn’t really doing anything at the time. I didn’t want to do school; I wanted to do music. So, I ended up moving down there for what would have been our senior year of college. And we wrote and recorded the first CAAMP album that year,” says Westfall.

Westfall had been listening to the Ray LaMontagne-infused folk CDs that Meier had been burning him, and he began to compose musical arrangements in that realm, while Meier honed in on the lyrical aspect of the band’s work.

“It was just fun for me to go out of my comfort zone and pick up the banjo,” says Westfall, who notes that he grew up listening to music more along the lines of the Ramones. “I still can’t believe I play the banjo; I never thought that’d be a thing for me.”

Meier wrote the concepts for two songs that the pair felt captured the sort of storytelling they were striving for — “Vagabond,” which now has 71 million streams on Spotify, and “Ohio,” a fan-favorite that tells the story of growing up and coming of age in Ohio. The duo then built the remainder of CAAMP’s self-titled debut record off the vibe of those two tracks.

“We were just kind of amusing ourselves at that point, seeing if we could do this; make a good album. And then we’d play an open mic and we’d get our three songs a night...We’d kinda see how the crowd reacted to certain songs to decide which songs we wanted to put on the album and which songs we wanted to leave out,” says Westfall. “We just hit the open mic hard every week, all year. And then, we’d practice every day. We’d play all of our songs. We’d sit across from each other up in Taylor’s attic and smoke American Spirits in his room and drink Coors light and it was so fun.”

When Westfall first moved to Athens in May of 2015, the pair drew up a “contract” and signed it. The contract stated that by the time Westfall had been in Athens for a year (May of 2016) the “wheels would be turning,” and Caamp would be well on its way to becoming a band that was taken seriously, the kind that could be a full-time job.

“Tay[lor] and I always were confident in what we were doing,” says Westfall. “We knew it was gonna work; we just didn’t know when.”

The pair put in the blood, sweat, and tears and found themselves making good on that pact. They’ve been growing CAAMP ever since.

During lockdown, the members of the now-four-piece band found themselves writing and recording CAAMP’s yet-to-be-released third full-length album and finally getting time to focus on their solo projects.

Westfall states that it was a very creative year for all of them and promises CAAMP’s latest cozy cabin music will be released in 2022.

“I like to write the sort of songs that evoke those nostalgic feelings,” says Westfall. “When I hear our music, I think of Athens, and that year, starting out, not knowing what we were doing, but just doing it, and not caring what anyone else thought. So, I hope people have those same sort of feelings with our music — thinking about where they were when they first heard it, and where they were in their lives at that point, and just looking back and having good memories.”

Now that the band is back on tour, Westfall can see fans connecting with the songs again, which has been an invaluable experience for him. This feeling is amplified when the band gets to play “By and By,” the title track from its 2019 sophomore album that captures the melancholy of rolling on through life’s challenges.

Westfall notes that in the past, shows have been blurred in his mind as soon as he steps backstage. Sometimes, he focuses so hard on doing his job that he can’t soak it all in. On this tour, Westfall has been taking out his in-ear monitor during “By and By” to allow himself a moment of gratitude.

“It’s bigger than us at this point,” says Westfall. “I tear up every once in a while, when we start playing that song and hearing the crowd. It’s crazy to think that your songs can...touch that many people. It’s a pretty surreal feeling.”