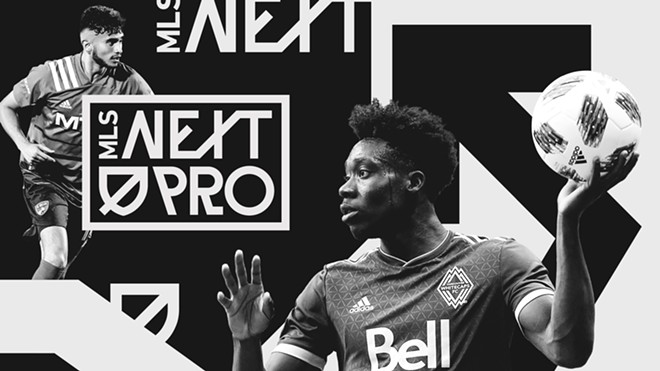 Cleveland has landed an expansion team in the MLS NEXT Pro league and it will begin play in the 2025 season.

An official announcement will be made this afternoon at a press conference at Pins Mechanical in Ohio City with MLS Next Pro President Charles Altcheck, Cleveland Soccer Group co-founders Michael Murphy and Nolan Gallagher, former MLS All-Star and USMNT player Justin Morrow, as well as others.

"We're super excited," Murphy told Scene. "It's a huge step to get MLS NEXT Pro here. Cleveland's going to have professional outdoor men's soccer. We're going to compete. We're going to put butts in seats. We have a brand in Cleveland that travels around the world. Fans are going to be excited."

The team doesn't yet have a name — Murphy said they will embark on a listening tour to engage with local communities in 2023 before they settle on anything — and there is not yet seats for those butts to sit in — the group is committed to building a right-sized, soccer-first stadium — but the first step is officially done.

MLS Next Pro, created as a bridge between MLS and MLS youth academies, is a third-tier league that debuted in 2022 with 21 teams. Twenty of those had direct MLS affiliations; Rochester New York FC plays as an independent club.

The young league is already in the midst of quick expansion, with seven more MLS -affiliated clubs joining for the 2023 season along with another independent expansion team in Carolina beginning play in 2024.

Cleveland, when it joins in 2025, with also be independent.

Murphy and Cleveland Soccer Group co-founder Nolan Gallagher, whose film distribution company Gravitas Ventures was sold last year for $73 million, have for years pushed to bring professional soccer to Cleveland. MLS NEXT Pro officials made a site visit to Cleveland in July, as Scene first reported, and the two sides have spent the fall hammering out the details.

MLS NEXT Pro president Charles Altchek told Scene he's very familiar with Ohio, having worked with the Columbus Crew and FC Cincinnati, and was sold on Cleveland after talking to Murphy and Gallagher over the past year.

"I spent a lot of time getting to know them, understanding their vision, and that matched up with what we want to accomplish with our new league," he said. "They have a big vision of what they want to achieve in Cleveland with professional soccer and our visions aligned with what MLS NEXT Pro is going to be now and in the future. It's not just about soccer. It's about everything that's happening  on and off the field and creating opportunities for all those who want to get into the game, from underrepresented groups and from around the world. What better way to bring everyone together than soccer?"

Murphy indeed believes soccer can bring Cleveland together, and he wants to hear from the community as the team takes shape.

"The exact process for the name will be rolled out in 2023," he said. "I want to go on a listening tour to hear from fans, to have the community help choose the right name, color and crest, a design that really represents Cleveland. I hope to have a lot of community involvement."

The next year will also involve discussions and planning for where the team will play. Both sides are clear that a newly built stadium is the goal. While few, if any, details are known at this stage, some amount of public financial support is likely to be involved.

"We've visited and have done diligence on a number of sites," Murphy told Scene. "We're into the process now and I anticipate the process will continue in the first part of 2023 to make sure we've looked at all viable options. I anticipate the news around professional soccer coming to Cleveland might engender some new ideas too. The bottom line is we're committed to working with all the stakeholders to have a best-in-class facility. I think it's essential to have buy-in from all the stakeholders regardless of how the project is financed. Our goal is to try and have something for 2025."

Otherwise, he doesn't want to speculate on location, cost or capacity. Existing MLS NEXT Pro squads play in stadiums with capacities anywhere from a couple thousand to 20,000, but something in the 5,000 to 10,000 range would probably make sense.

Murphy noted that temporary options around the city and Cuyahoga County do exist, but the goal is to avoid such a scenario. Altchek, for his part, confirmed to Scene the league would not have awarded a team to Cleveland without a concrete commitment to build a new facility.

"We know how important it is for a team to have a venue that's built for soccer and built for the fans and players to be able to show the best of the sport week in and week out," Altchek said.

A new stadium would also be essential to achieving the Cleveland Soccer Group's other goals, including bringing professional women's soccer to Cleveland.

They submitted a bid this month for a National Women's Soccer League team, which will expand in 2024 and again a few years after that.

"I met with the commissioner and her team in New York and gave my full-throated reasons why Cleveland is the best choice for the next market," Murphy said. "When I spoke with them, they identified that the right facility is important to them."

If not in this round, Murphy is confident Cleveland will be a competitive option in the next.

Tom Chema, who steered Gateway completion and who has continued consulting on stadium and arena projects, will also be in attendance at Monday's press conference.

Cleveland's new team will debut during what is a feverish push to get soccer in front of more fans across the country.

MLS NEXT Pro is expanding at the same time as the second-tier United Soccer League, which also operates lower-level leagues, grows as well. The battle for clubs, territory, eyeballs and money has engendered spirited opinions amongst fans.

Murphy told Scene he pitched Cleveland to the USL — "I went to their midsummer meetings down in Louisville. It's a great product. Men's and women's teams under common ownership is a concept that I hope to bring here" — but believes MLS NEXT Pro was the better option for a variety of reasons.

"We did a lot of diligence. I talked to a number of owners both in MLS and other leagues and ultimately we decided because of the distribution platform [MLS/MLS NEXT Pro signed a 10-year deal with Apple TV to broadcast all games starting in 2023] and because I wanted to tie Cleveland soccer to the number-one soccer league in this country," Murphy told Scene. "Because I think our vision is really a long-term vision and when I look down the road 15 years from now I think we're going to be best served by these decisions."

MLS NEXT Pro is just a year in, he noted. "Watch what this league is going to do."

That will include not just a platform where fans can watch all the games with a professionally produced broadcast (something that wasn't available in 2022, which featured streaming-only options and an artificial-intelligence camera system), but the addition of 10-20 more independent teams in the coming years.

Altchek also points to the distribution deal and planned expansion of independent teams as two reasons to feel nothing but excitement and optimism for what MLS NEXT Pro can be.

"I'm really excited about what we're doing," he said. "We keep reminding ourselves that we're just getting started, that these are the early days. We have a great opportunity to do something special."

Getting there means remembering four basic pillars the league was founded on, he said — focusing on local communities; emphasizing player development; using innovation; and being committed to diversity, equity and inclusion.

"We want to ensure our clubs are connected to the local communities," he said. "We want to create a pathway for the next generation of stars, for young players in the Cleveland region. We want to continue using this platform to push the sport forward with new rules and new technology. And we want to create opportunities for those who want to work in and around the sport."

New rules included instituting penalty kick shootouts to award an additional point when games end with ties in regulation and one, which began midseason and which showed how nimble the league can be he said, that put a limit on how long a player can be on the ground before deciding whether he needs medical attention.

New technology included the AI camera — "We took a risk. Some aspects were great. Some were more challenging" — which thankfully will be replaced with professionally produced broadcasts.

But whether it's in service to players, fans, or both, "it gives us the opportunity to try new things."

Michael Murphy is all in on soccer's ability to bring groups of people together. It's been part of his pitch through the entire process and he relishes the chance to bring the global game to a global city.

"I see this as being this transformative vehicle in the region," he said. "We have assets in our immigrant communities, both old and new, and soccer is a common language. We plan on being very intentional and reaching out to these groups. You'll see it come through in our launch video."

"I want to also find new avenues. I want to lean into Cleveland's sister cities around the world. It's largely a ceremonial thing now, and I don't want to knock anyone's efforts, but there are almost 100 professional soccer clubs in our 23 sister cities. Imagine us reaching out and building relationships around something tangible like soccer. Let's do a home and away with Bangalore, India. Couldn't we develop relationships that bear fruit?"

For now, Murphy has two years and some change to get a team on the field. Years, he noted, that are sandwiched between two World Cups that should bring even more fans and excitement to the game.

"Ramping up with the excitement for this World Cup, and with us hosting the 2026 World Cup, and the growth in soccer, this is part of Cleveland's voice in that whole process," said Murphy, who will himself be skipping family Thanksgiving this year to fly to Qatar to watch the U.S. Men's National Team play England this Friday. "We have a nice runway to do things the right way, but it's not forever. As soon as the announcement is over the work begins to bring all the other things together."

Currently, Cleveland has two semi-pro or pre-professional teams: the Cleveland Force in the USL League 2 and Cleveland SC in the NPSL.