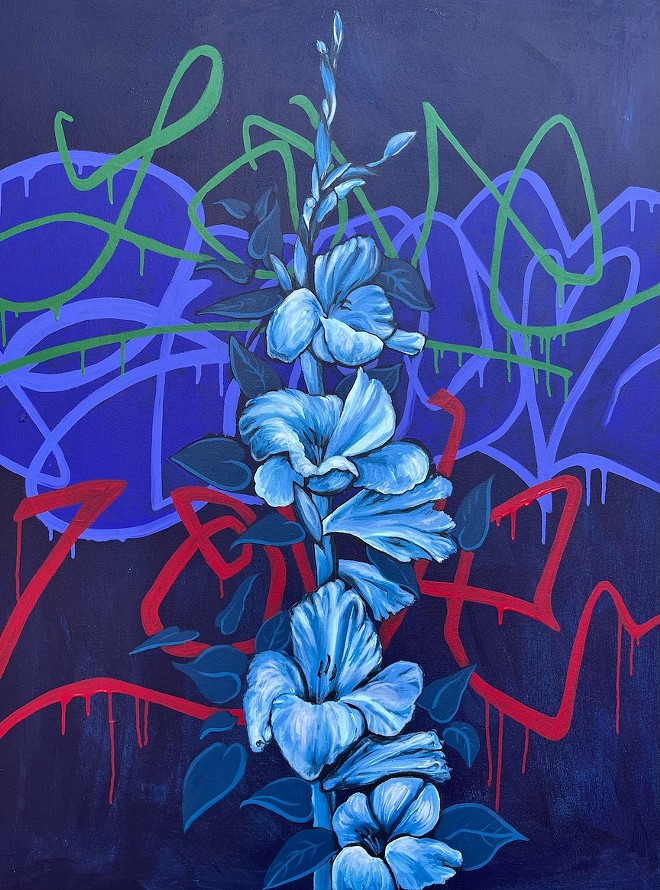 Eileen Dorsey and Garrett Weider
"It Was a Surprise," acrylic on canvas 2022

Eileen Dorsey and Garrett Weider, having just celebrated their four-year anniversary as a couple, present a fully collaborative exhibition of primarily new work that opens today from 6 to 8 p.m. at the LK Gallery at The 9.

The couple aimed at a fluid exchange of ideas through a succession of each artist taking a pass at a particular piece and giving it back to the other to reevaluate and address it a handful of times until they felt it had reached maturity. It took them letting go of their preconceived notions and allowing the works to have a life of their own for them to manifest.

“For this to work, no ego, none of that, don’t get too precious here,” said Weider. “Don’t get attached. Just create something cool and give it off to Eileen and if she does something that I don’t agree with that’s fine, she can give it back and I can do something else.”

“It’s been exciting, you don’t know what to expect,” said Dorsey. “It’s a surprise and a metaphor for life. You don’t know what life’s going to bring you. When you’re in relationships you’re hit with so many things and having a partner who can adapt to you for your artwork or for your life is awesome!”

This is not the first time these two have collaborated artistically, as they have previously joined forces mural projects.

Weider has a graphic design degree from Ohio University and derives inspiration from graffiti, comic styles and pop art. He said that working together so closely with Dorsey means it’s hard for each other’s styles not to rub off on one anther a bit, but that they remain steadfast in their respective styles.

He said that he wanted to experiment with some graffiti aspects in this work, like in the collaborative piece, “It Was a Surprise 2,” which depicts cool-toned gladiolus darting up through the frame with what appears to be graffiti tags filling the background as if the flowers were growing under some Cleveland railroad track illuminated by the moonlight.

Dorsey tends to have a fine-art, painterly approach, whereas Weider draws from a more illustrative vein, where outlines have a more determinative place in his work. But Dorsey said that collaborating as a couple had been effortless, a statement which many couples would love to be true in any area of their relationship.

“I started painting these gladiolus flowers and the picture that I used I took in my garden and I didn’t even plant this flower,” said Dorsey. “It was a surprise I got at the end of the summer, and I kind of used that as a metaphor for a relationship. I was coming out of a marriage and I didn’t expect this to be something special but it actually is and I think that’s in a lot of the show, and in the title of the show, 'Love and Art.'”