'Candlelight Hypothesis,' Now at Cleveland Public Theatre, is an Immersive Trip Inspired by the Myth of Icarus

It's a mixture of poetry, ambient music, stylized movement, and it's worth the experience 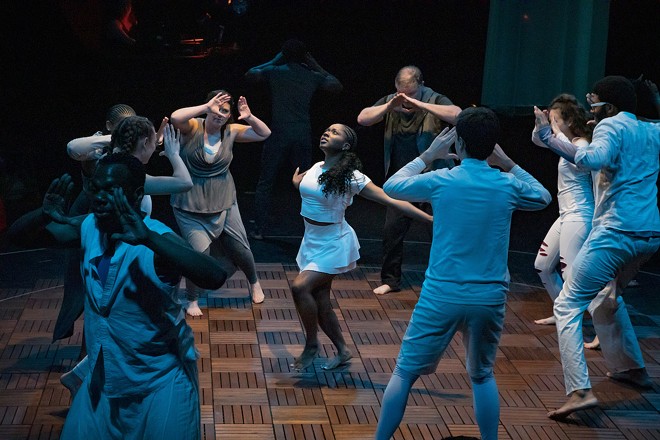 The myth of Icarus is usually meant to represent the folly of overreaching one's limits. But as some have noted, Icarus actually did succeed. He escaped his prison labyrinth and flew all the way up to the sun before the wax on his feathered wings melted. It was a success followed by a failure, which pretty well describes all our lives, in part or in full.

If you're willing to cut the tethers of "real" life for a short while and explore what awaits in a different sort of time and space, consider a visit to "Candlelight Hypothesis," now at Cleveland Public Theatre. Far from any sort of a traditional play, this is a theatrical experience inspired by the myth of Daedalus and Icarus in which you walk around (and are occasionally led into) different spaces to experience a mixture of poetry, ambient music, stylized movement, and snatches of a story that now and then makes traditional sense.

The journey begins in a small room with a few other audience members, where you are invited to create a personal assemblage of found objects that have some relevance to your life. (My assemblage included a camera lens, a tiny funnel, a pair of scissors and a red foam ball. Yeah, don't ask.)

From there, we are informed of the "rules" of this presentation (don't touch the actors, don't open closed doors), and then invited to roam the space on the main floor of the CPT space, where the audience usually sits. Here, the cast moves around and about each other while chanting to the accompaniment of recorded music. Soon we are surrounded by individual actors holding long poles topped with white umbrellas with sheer white curtains flowing to the floor, moving slowly like airborne jellyfish. Above the space and along the walls, curvy fabric sculptures are suspended to represent abstract wings.

For the duration of the piece, long in incremental development at CPT under the guidance of executive artistic director Raymond Bobgan, we are free to move around, sit in chairs here and there, and explore small cubbyholes. In one, there is a bowl of sweets and a detailed drawing of a moth.

Turns out, paper moths are recurring key words in the overlapping monologs and small dialogue scenes that are acted out—along with other words such as souls, fairies, and origami. At times you may be invited into a small hallway with a single actor, who hands you certain small objects for your reflection. Or by another player, who leads you through a labyrinth of doors and asks you to consider the relationship of one twig, one person and one star.

But if you relax, unclench, and allow yourself to follow along, you may find a fold or two revealed in yourself that you didn't expect. Let's face it, each of us are tight little balls of flesh and blood origami, imprisoned by the warp and weft of the folds in our brains. And now and then, it feels good to unwrap some of that and see what it reveals.

At the conclusion, even the production's stage manager takes part and reminds us that we're all so busy responding to light and sound cues we may miss the reality that exists within us, around us, and maybe even up in the sky where Icarus once frolicked.

Candlelight Hypothesis
Through October 31, a "Choose What You Pay" production at the Cleveland Public Theatre, 6415 Detroit Avenue, cptonline.org, 216-631-2727.