American Revolution tweaks the story of our forefathers. 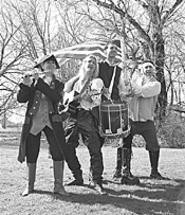 Talkin' about a Revolution, happening at Kulas Community Stage.
6/18-7/4

The American Revolution director David Hansen laughs when asked if Bad Epitaph Theater Company's production of Kirk Wood Bromley's historical play is the uncut version, which is rumored to top off at four-plus hours. "Hell, no!" he scoffs. "It was written to be adapted." The acclaimed work -- which imagines George Washington as an African American and the Marquis de Lafayette as a woman -- is structured like a Shakespearean epic, including long, winding verses. "It's quite an ambitious piece," Hansen says. "It's a nontraditional look at the Revolution, but it's still faithful to the story. It's about the spirit, drive, and imagination of people who are so dedicated to the cause. Along the way, we discover what the American spirit is. As Bromley put it, 'It's a tune you're familiar with, but with new words.'" American Revolution is at Kulas Community Stage (at Wade Oval in University Circle) Friday through July 4. Show times are 7 p.m. Friday and Saturday and 3 p.m. Sunday. Admission is free; call 216-556-0919. -- Michael Gallucci

It's a play about a big Italian wedding, where the audience serves as guests and is served tomato sauce-drenched food. Sound like something you've seen before? "We tell everybody Tony and Tina got divorced," laughs Maggie Cupp, spokesperson for Joey & Maria's Comedy Italian Wedding, which comes to town Saturday. She's referring to Tony n' Tina's Wedding, the interactive theater production that plops audience members in the middle of a not-so-happy couple's nuptials. Says Cupp about Tony n' Tina, which opened "about six months prior to" Joey & Maria, "They have a terrific concept." No kidding. Her show borrows the former's theme, meal, even its ethnicity. But "We interact more with guests," Cupp says. "Everybody is treated like a member of the family." The show starts at 6:30 p.m. at Dave & Busters, 25735 First Street in Westlake. Tickets are $49.50; call 440-892-1415. -- Diane Sofranec

Better to Burn Up

It seems like the Fever has been on the road nonstop the past year, pushing its Pink on Pink EP. The New York City garage rockers just released their debut album, Red Bedroom, a solid chunk of Nuggets-style punk that fiercely works both slurred vocals and pumpin' organ. It's like 1960s-era, British-Invasion-inspired suburban rock united with modern-rock cynicism and held together with a dollop of hipster attitude. Catch the Fever -- with Death From Above and the Confidence Interval -- at the Grog Shop (2785 Euclid Heights Boulevard in Cleveland Heights) at 9 p.m. Thursday. Tickets are $7, available by calling 216-241-5555. -- Michael Gallucci