The Cuyahoga Valley beer train is barreling down the tracks. 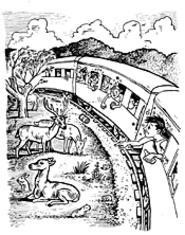 Jim Campbell
Those who hop aboard the Cuyahoga Valley Scenic Railroad this Friday will find, um, hops on board. In honor of Oktoberfest, the third annual Beer-Tasting Train offers refined brew and the opportunity to drink it in a moving vehicle without being tailed by those pesky blue and red lights.

Much like the vino-based events where Burgundies might be matched with baked brie, the beers are paired with trendy appetizers, ranging from white pizza to biscotti to froufrou sandwiches. "We provide tasting notes and a brief description of each beer and what food we paired [it] with," says Karen Smith, emcee for the event.

Those seeking keggers need not bother: The brews featured this weekend are an esteemed bunch, Smith asserts, meant for the urbane drinker. "We don't have Corona on board or Miller Lite. For that reason, we tend to get a crowd that's usually in their late 20s to early 40s."

This year's tasting features Schneider Weisse, a German wheat with a hint of banana and vanilla that's rated "world-class" by Michael Jackson -- "the beer guru, not the singer," Smith clarifies. "In his mind, it's the perfect example of what a wheat beer should be.

"My favorite on the list is Einbecker Schwarzbier," she adds, referring to the dark beer that's tinged with notes of chocolate and coffee. German beer enthusiasts also can taste Wolznacher Burgerbrau Helles, which has a bouquet as full as its name.

Those averse to Germanic brew can choose to swill selections from other reaches of the globe, like England's Old Speckled Hen and Old Suffolke, or Kiuchi's Nest White Ale from Japan. In the beer-tasting train's inaugural ride, "We used all German beers, but we were limiting ourselves," says Smith.

Though each beer is described at length as passengers imbibe, Smith admits that the voice-overs usually surpass the attention spans of those on board. "Usually, by the fourth beer, nobody cares," she laughs.

John Lane, co-owner of the Winking Lizard restaurant chain, is a featured guest speaker. Other Lizard reps will be available to impart their beer knowledge as well. In fact, many of the brews featured this weekend are on the Winking Lizard's popular World Tour of Beers.

"In addition to the guest speaker, we also have beer representatives in each car," says Smith, adding that the "brew-choo" is steadily gaining popularity (reservations are recommended). She says another beer-tasting train is scheduled for March, and the railroad plans to fill at least 10 cars at this year's event (each car holds about 50 passengers).

So, with all of the flowing lager, do things ever get unruly? "Not unruly in the sense where anybody has to be cut off," Smith says, somewhat cryptically. She also assures that no conductors are drinking on the job. The only folks drinking are the passengers and, of course, herself.