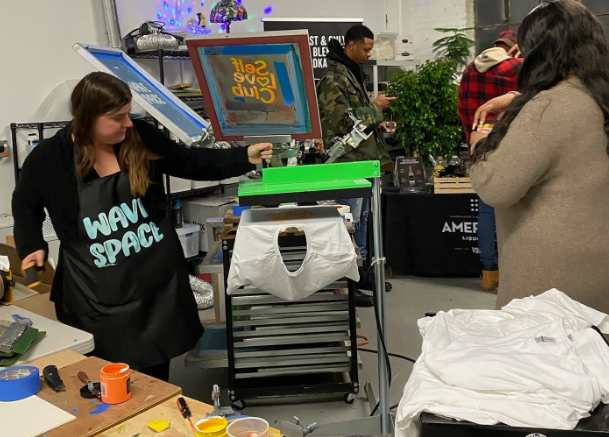 Julie Schabel
Wave Space begins hosting a monthly Drink and Draw event on March 6.
Julie Schabel, a local artist who owns Wave Space, a new gallery/screen print shop in Lakewood’s Screw Factory, says she originally intended to open a gallery in New York, where she lived and worked up until about six years ago. But when she realized it just wasn’t feasible, she moved back to Northeast Ohio to bring the art and music community in Cleveland together.

Just last year, her dream came to fruition when she opened Wave Space. She’ll launch a monthly Drink and Draw Event on Sunday, March 6, at the gallery. It starts at 6 p.m., and Theo, a local DJ, will provide the tunes. Lori Switaj, who runs Recreational Pots and Plants, will provide the plants that will serve as inspiration. Tickets to Drink & Draw at Wave Space cost $20. The ticket price includes the cost of supplies and an open bar. American Liquor will sponsor the event, and bartender Michelle Fiorta will serve up creative cocktails using American Liquor vodka and will be on hand all Wave Space events.

Schabel, who picked up photography as a teen while growing up in Lakewood, learned screenprinting while holding down a photography internship at the Lakewood Observer.

“The Observer had a screen printing side business, and that’s where I started,” she says one afternoon from Wave Space, a brightly lit space on the Screw Factory’s third floor. “I would wash screens out, and I learned basic stuff.”

While a student at the Chicago Institute of Art, she learned photo and printmaking and started to use her photos to make screen prints. She began making T-shirts for her friends’ bands and then moved to New York, where she worked as a fashion and music photographer.

“I had a good network of musicians and artists in New York; I really like combining music and visual art,” she says. “The music scene here in Cleveland is really great, and I want to feature some of the musicians at Wave Space.”

Schabel held her first event, a special brunch with Self Love Club her friend Sunda, in November of last year, and has slowly started adding events and activities to the docket. Last month, she debuted the Monday Program, an event featuring live screen printing and music. "We are going to try to do one big event like that per month," she says.

Don’t Look Now: The Great Escape Artist, a sculpture installation by Heather Molecke that's supported by the Satellite Fund, administered by SPACES and funded by the Andy Warhol Foundation for the Visual Arts Regional Regranting Program, will open on April 1.

“The sculpture has lights and looks like a carnival ride when you walk in,” Schabel explains. “It’s a great sculpture, and you can interact with it.”

Schabel, who currently works as a substitute teacher, hopes her new space will bring together artists from different genres as well as patrons with a wide range of interests.

“I want to give artists a cool spot to come together and hang out,” she says. “And maybe they can learn different types of art techniques too.”

Jeff has been covering the Cleveland music scene for more than 20 years now. And on a regular basis, he tries to talk to whatever big acts are coming through town, too. If you're in a band that he needs to hear, email him at [email protected]
Scroll to read more Arts Stories & Interviews articles