This Way didn't lead to album sales, but it brought peace to a wearied singer. 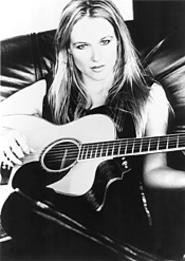 Jewel: She will save our soul, or at least sing for us, at Nautica.
You probably heard that Jewel fell off a horse recently. The singer-songwriter was hanging out at her rodeo-star boyfriend's ranch and took a header to the ground. She broke her collarbone and a rib, and had to cancel a few of the European dates of her current tour in support of This Way, itself a collection of fractured love songs and tales from the road. It's a dustier set, more countrified than her previous two albums -- another thing for which she can thank her man-of-the-land beau.

"I've always written country songs," she insists. "Out of 500 songs in my catalog, a good quarter of them are country. I grew up on it. My dad is a cowboy who listened to Hank Williams and George Jones. I've always been attracted to that. I love country music. [Although] there are obvious [country songs] on my first record, I think I scared my label a little [this time]."

But there's a sense of accomplishment about This Way. If Pieces of You, her debut, displayed a spark of independence from the transported Alaskan, who lived in a van before she got a record deal, and 1998's Spirit was a conscious move to develop/expand Pieces' belated success, This Way is all about Jewel's way.

"I had a vision for this record," she says. "It sounds more like me than any of my other records do, and I think it shows my sensibility and versatility."

Yet one senses that Jewel has come to that mythical singer-songwriter place: the crossroads. This Way didn't sell well, despite radio's embrace of its first single, "Standing Still." And its Nashvillian touches (the album was recorded there), like the fiddles and a song called "Jesus Loves You," are more distancing than she cares to admit. Not that Jewel cares. According to her, the fame, the record company, the business of it all, is just too stifling.

"I didn't feel useful by the end of my last record," she explains. "I felt I was adding to the noise and didn't really have a sense of purpose. I wasn't writing, because I was busy promoting. I felt fake. I'm happy when I'm creating.

"You've heard it a million times, but I was worn out. I never had a Christmas off. I just [needed] rest."

Which brings us to This Way and its lite sociopolitics, dreamy moralism, and -- hello, Cleveland! -- connection to this city. "I was in Cleveland when I wrote it," she says of the song "Cleveland." "It's about someone who was apart from me. It's a very old song."

Still, don't count out this multitasker (since 1998, she's published two books and recorded a holiday album, and was in a movie directed by Ang Lee). There's a glow beneath the tarnished surface. Fittingly, she's able to shine. "I know what I want to say and what kind of record I want to make," she says.

"And I'm not afraid of making that record."