Racism, Sexism and Other -Isms Keep Women Down, But Undefeated, in 'Intimate Apparel' 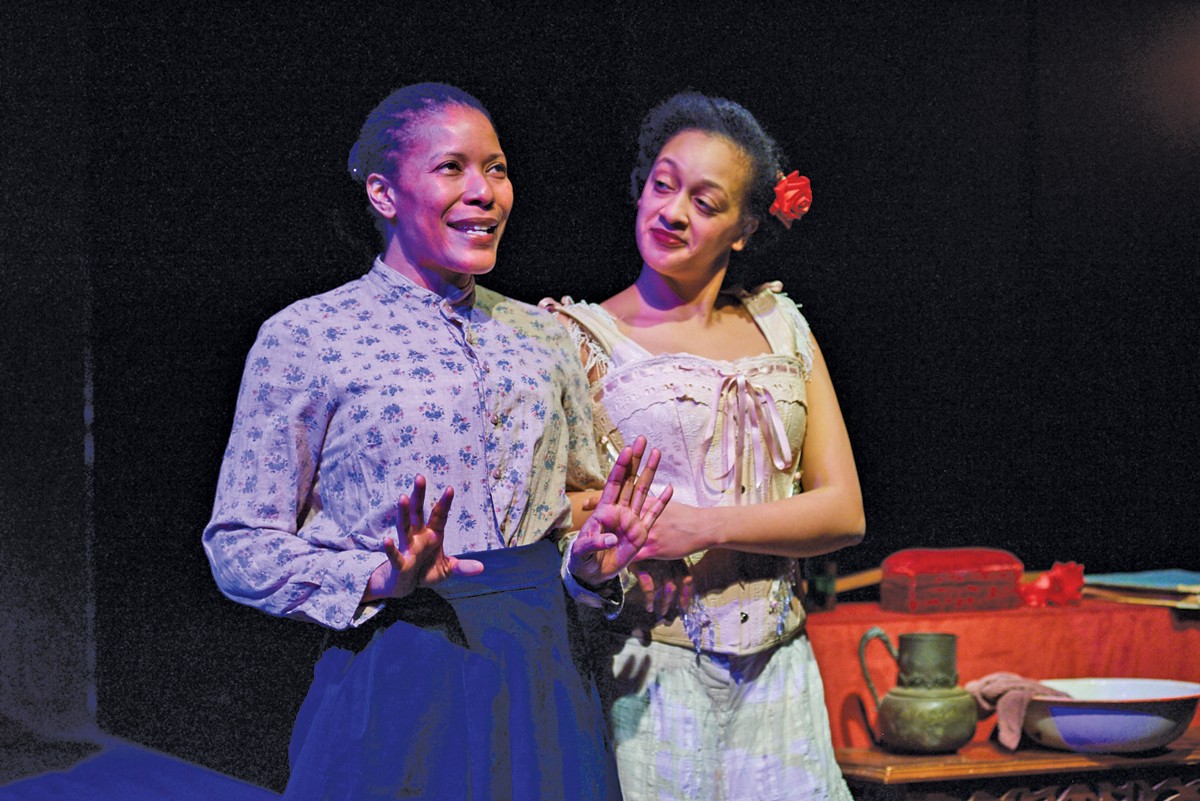 Through Feb. 16 at Ensemble Theatre

It was nearly 17 years ago — Feb. 21, 2003 — that Intimate Apparel made its world premiere in Baltimore, Maryland. Since then, two-time Pulitzer prize-winning playwright Lynn Nottage's sweet, sad tale of love and female identity in the face of betrayal and societal constraints has gone on to become one of the most produced plays in America, a favorite among professional theater companies and high-school drama clubs alike.

This, alone, speaks volumes about the story's grace and intelligence, and about Nottage's ability to uncover the meaning in the lives of marginalized people. Factor in the superb acting, smart set design, and deft directorial pacing of the current production at Ensemble Theater, and you get a dramatic experience practically dressed for success.

It could be argued that in the nearly two decades since the play premiered, graceful storytelling has gone out of style. Indeed, for a piece of theater that deals in a wide range of –isms — sexism, racism, classism, and even some sidelong glances at the soul-crushing potential of religion — Intimate Apparel speaks softly at a time when political discourse has become an ear-splitting bellow.

This lack of stridency, however, is likely one of the reasons the play has remained so popular. Set in New York City in 1905, Intimate Apparel tells the story of sensible, self-disciplined Esther, an African-American seamstress who has escaped a childhood of poverty and now makes a decent living crafting charming undergarments for appreciative clients, the wealthy Mrs. Van Buren and the plucky prostitute Mayme among them. While she shares a warm, but mainly unspoken, affection with her fabric supplier, Mr. Marks — an orthodox Jewish man from Romania whose race and religion sharply curtail his potential as a suitor — the 35-year-old Esther is keenly aware that her value on the matrimonial market is tanking. This understanding leads her to make some very poor choices, epitomized by a reckless marriage to George, a Panamanian suitor she has known only through an exchange of letters. Predictably, George is not the man she hoped he would be, eventually breaking her heart, crushing her dreams and sending her back to her solitary life in a boardinghouse run by the motherly widow, Mrs. Dickson. As the curtain drops, we wonder: Will Esther rise from the ashes? Thanks to her strength of character, the odds look good.

The real substance of this tale comes from Esther's relationships with her fellow characters; and the Ensemble cast, under the direction of theater veteran Sarah May, wrings from those relationships every available drop of feeling. As Esther, the central spoke in this relational wheel, Kimberly L. Brown is a multi-dimensional delight, giving us a woman by turns stolid and silly, angry and injured, dignified and defeated. What Nottage's dialog doesn't supply, Brown provides with myriad subtle gestures and expressions, from radiant smiles and quiet chuckles to discrete eye rolls, subdued scowls and cagy sidelong glances. The bonds never feel more real than in Brown's scenes with the irrepressible prostitute Mayme, played with vigor, humor and – soon enough – pathos by the wonderful Zyrece Montgomery.

Esther's relationship with the tony Mrs. Van Buren (Diana Frankhauser, wielding a strangely thick Southern drawl) is a more formal one, burdened by inequities of race, class and wealth. Still, the women find common ground in their man troubles; for Mrs. V, that means losing her husband's love over her inability to conceive.

Unrequited love is the reverberating bond between Esther and the endearing Mr. Marks (charmingly captured by Craig Joseph), whose love life is circumscribed by both religious and cultural norms. In place of physical intimacy, the two share a sensuous delight in the look, feel and provenance of the fine fabrics that Esther comes to buy every Tuesday morning. The warmth this mismatched couple generates is as seductive as Chinese silk.

The villain in all this is, of course, George Armstrong, the mendacious suitor and faithless husband that Esther takes despite her better instincts. In this mesmerizing combination of Caribbean charmer and cold-hearted cad, Nottage seems to encapsulate the hard choices that women can face between lonely independence and coupled indignities. To his great credit, the engaging Leilani Barrett gives us a character of considerable depth: We can, and do, sympathize with George's outrage over job discrimination, his dismay with the gloomy New York City weather, and his dreams of climbing the social ladder — while still finding him a very bad man.

Rounding out the cast is Reva Golden as the well-intentioned gossip and boardinghouse owner Mrs. Dickson, who married for money rather than love. Wealth aside, it turns out the former Mr. Dickson was still no prize, "so high on opium he didn't even know he was married."

All this well-modulated action takes place on an equally well-considered set designed by Ian Hinz, its multi-level space divided into distinct quadrants — Esther's room, Mayme's room, Mrs. Van Buren's boudoir, and Mr. Marks' fabric shop — allowing the action to move almost seamlessly from one scene to the next. Sepia-toned projections of turn-of-the-century NYC provide a dynamic and evocative backdrop.

And, of course, in a story about clothing, costume design must be held to high standards. Here, Katie Atkinson and Jill Kenderes do a commendable job, dressing the characters in detailed, era-appropriate garb ranging from Esther's modest skirts and high-necked blouses to Mayme's crimson corset and lacy underthings.

It's productions like this that will keep Intimate Apparel from ever wearing thin.