They make the production the soaring, collaborative work of genius that defines truly great theater 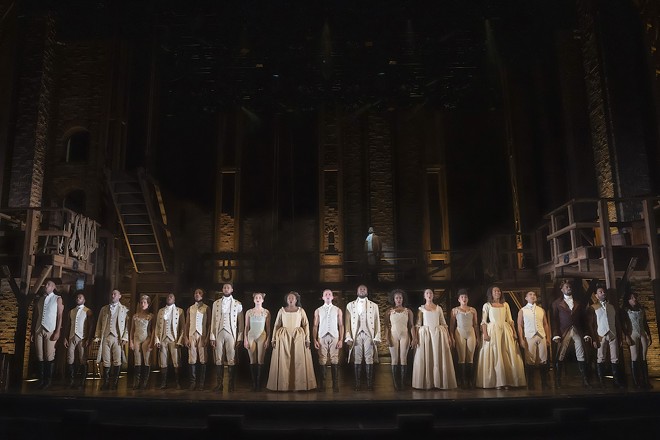 Yes, that is the first paragraph of this review of Hamilton. It isn't a misprint or a misplaced paragraph.

Those individual performers comprise the "chorus line" of the magnificent musical by Lin Manuel Miranda. Their exquisite dancing, movement and singing—minus any character names—provide the skeleton, lungs, and ligaments of this not-to-be-missed production. Ensemble players are usually mentioned at the end of reviews such as this, and rarely by name. After all, there are stars aplenty in the character roles who need their spotlights, and we'll get to them shortly.

But this ensemble not only provides choral backup to many of the songs, they also physically mirror the quicksilver mood changes of lead actors in many scenes, under the guidance of director Thomas Kail and choreographer Andy Blankenbuehler. Also, they populate the play with telling reactions: small gestures, head turns, arm twitches, and leg stretches that are rich with meaning and pull everything together. The ensemble is indispensable, and in this production they are spectacular.

Hamilton premiered just seven years ago Off-Broadway. But for many theater buffs and many others, its impact has been so enormous that it feels as if we all grew up with it, or were born with it as part of our DNA.

For any show as popular as Hamilton, there is always a sneaking worry that the next touring company will not be up to snuff, that they will mail it in. Well, that's not happening with this cast. That's clear once Pierre Jean Gonzalez takes the stage alone as Alexander Hamilton and uses his ample pipes to summarize his character's unlikely background: "How does a bastard, orphan, son of a whore/And a Scotsman, dropped in the middle of a forgotten spot/In the Caribbean by providence impoverished/In squalor, grow up to be a hero and a scholar?"

This story of Hamilton and the Founding Fathers is fleshed out in sung-through scenes spiked with Miranda's trademark R&B riffs, sly hip-hop syncopations, and witty raps that will fly by if you're not completely committed to absorbing every single moment. All the Fathers, as well as the bulk of all other roles, are played by Black and POC actors, a not-so-subtle snarky nod to some of those esteemed gentlemen of yesteryear who imagined this visionary experiment with democracy while owning slaves themselves.

As the play progresses, we learn about Hamilton's driving passions, which includes his love for Eliza Schuyler, soon to be Eliza Hamilton (Nikisha Williams, who stops the show in the second act with her splendid evocation of the shattering "Burn"). Eliza is watched over by her sister Angelica (the superb Ta'rea Campbell).

We also learn about Hamilton's shortcomings, and the intrigue among the Fathers who are always jockeying for position, first during the Revolutionary War against England and King George (a nicely mewling Neil Haskell) and then while they attempt to assemble a functional government.

Of course, Hamilton's major foe is Aaron Burr. After a slow start, Jared Dixon warms to his task of first confiding with and then confronting Alex, culminating in the mano-a-mano duet "Your Obedient Servant," followed by the duel-heard-round-the-world.

While it is true that there is nothing worse than bad theater, it is also true that there is nothing better than truly great theater. And the latter is what the version of Hamilton provides in abundance. At the curtain call, all the stars stand in a straight line, shoulder-to-shoulder with the ensemble, with no featured bows for anyone. And that is as it should be for a show that is, very simply, a soaring collaborative work of genius.