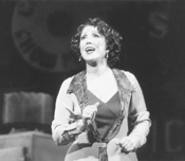 Donna McKechnie as a kinder, gentler Mama Rose.
Gypsy suffers when done wholesale. To thrive, it demands grandeur, integrity to period, and above all, a 14-carat star as Mama Rose to light up Tin Pan Alley's answer to Medea.

The Great Lakes Theater Festival, while honoring its pledge to tackle works that have made American theater great, has in this case had to make some bargain-basement reductions, including a reduced orchestra, some egregiously inappropriate costumes, and the wrong star in musical theater's most challenging female role. Yet, even covered in rhinestone compromises, the show at the Ohio Theatre still gives audiences a peek at Broadway's most perfect musical.

Any cultural historian preparing a time capsule of imperative Americana would be duty bound to place a copy of Gypsy (which premiered in 1959) somewhere between Huckleberry Finn and the songs of Stephen Foster. Like the aforementioned works, it defines the American character. In this instance, it dramatizes the 20th-century belief that anyone can be a star. It chronicles the ultimate stage mother gone haywire with ambition, living vicariously through her daughters. The real Gypsy Rose Lee was the Madonna of her day, an immensely driven sensation-seeker -- a stripper famous for casting off witticisms rather than her clothes. Tall and handsome, rather than beautiful, Gypsy parlayed a small measure of talent (she could barely sing or dance) and lots of style into an eccentric lifelong career. She had a knack for pulling off just the right stunt, including a best-selling ghost-written murder mystery (The G-String Murders). After she became a star, her greatest talent was that of self-promotion: She became her mother.

If Producer David Merrick hadn't decided that her immensely enjoyable, shamelessly embroidered memoirs would make an ideal musical, the once popular peeler, star of the B-film epic Belle of the Yukon, would be little more than a footnote in musty tomes of show-biz esoterica, and even worse, her magnificent maniac of a stage mother would be consigned to the same oblivion.

Through that strange alchemy of collaboration that goes into musical theater, a hit-making tunesmith named Jule Styne, the cerebral lyricist Stephen Sondheim, tough-minded playwright Arthur Laurents, and a brilliant, masochistic choreographer named Jerome Robbins all inspired each other to unprecedented heights. They concocted out of fluff a work that ranks with Show Boat and Oklahoma! as a prime specimen of the evolution of the Broadway musical from vaudeville and European operetta into a great American art form. On display are the ultimate glories of musical theater, a harmonious welding of music, lyrics, and dance. Here, strip music takes on the emotional power of discordant thunderbolts; the songs have the psychological complexity of a Eugene O'Neill interior monologue. For example, by a breathtaking stroke of efficiency, comedy and narrative are blended in one of the great show-stopping numbers of all time -- three strippers testifying to the unimportance of talent and the necessity of a gimmick. As her tutors, they foreshadow the transformation of the gawky young Louise into the irresistible mistress of sham that was Gypsy Rose Lee.

As the eponymous burgeoning star, Anne Torsiglieri has what it takes. In Act One, as the plaintive Louise, her rendition of the forlorn ballad "Little Lamb" gives the brassy show a much-needed moment of tenderness. In Act Two, she powerfully transforms from Shirley Temple waif to witty Ann-Margret siren. Her culminating strip is a blaze of giddy carnality. But director Victoria Bussert made a major faux pas by having Torsiglieri reveal her breast; the real Gypsy was famous for never showing anything except her sense of humor.

Janet Watson is credited with concocting new choreography, but, in reality, her work is chained to the imperishable inspiration of Jerome Robbins. John Ezell's set has an innovative five-and-dime chintziness; it only seems to come alive when Dylan Fujimura's magnificently built giant candy heart, replete with roses, offers a phantasmagorical haven for stripping.

Donna McKechnie, an illustrious Broadway dancer who made her name in A Chorus Line, is supposed to be playing the show's stage mother from hell. McKechnie is an immensely appealing performer with a soothing, pleasant singing voice. Her soft wistfulness made her an ideal Charity Hope Valentine; she excels at bewitching gentleness. These are the very elements that make her a faded Rose. From Ethel Merman's relentless blunderbuss to Rosalind Russell's elegant dagger of a performance to Angela Lansbury's Lady Macbeth madness, this character has always been a charming but destructive force of nature.

McKechnie's inappropriateness for the role has been exacerbated by ill health and James Scott's overly subdued costumes (without the hats that were obligatory for every woman of that era). These costumes leave the betrayed actress looking like a forlorn June Cleaver on her way to a DAR meeting. The cast is directed to react to her musical outbursts as if they were thunderstorms, yet these horrified reactions appear ludicrous when elicited by the star's pitiful drizzles.

For months, Clevelanders have been wondering what the ridiculous advertisement featuring feet in a pair of oversized shoes was supposed to symbolize. Suddenly, with this miscast star in a role totally unsuited to her persona, the ad for Gypsy becomes sadly prophetic.