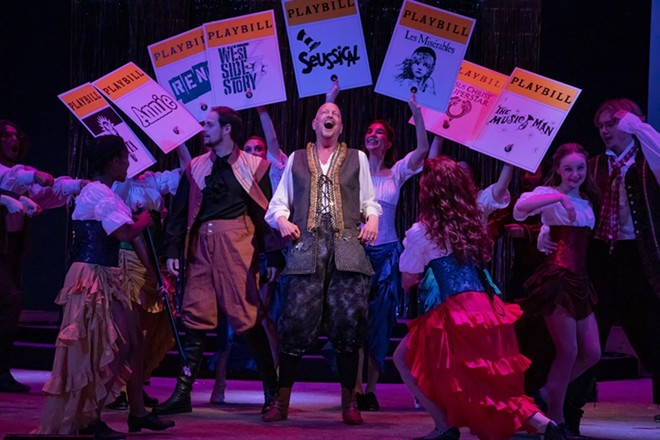 If you're a theatergoer who prefers The Music Man to Hamlet, Beck Center has the show for you. Something Rotten is a lively spoof of Shakespeare while it wears its love of Broadway musicals on its ruffled sleeve.

The conceit is that young Will is a pretentious playwriting hotshot who prefers to steal his best lines from his contemporaries. Two of those are the Bottom brothers, Nick and Nigel, who are struggling to write something that can compete with the Bard of Avon's glistening creations. Older bro Nick, feeling desperate, finds a soothsayer (Thomas Nostradamus, the slightly less gifted relative of the famous guy), who tells Nick the hot theatrical form in the future will be, you guessed it, musicals.

This sets up the show's signature song, "A Musical," a hilarious deconstruction of the gleeful absurdity of having characters in a play sing their thoughts instead of just speaking. And as a bonus for Broadway musical nerds, there are a bunch of instrumental nods to well-known hits—see if you can catch them all.

After some false starts on a writing a musical, Nick returns to Thomas and asks him what Shakespeare's biggest hit will be. Thomas gets his wires crossed and mistakes Hamlet for Omelette (and the Danish prince for a Danish pastry). Thus, Nick and Nigel set off to create a breakfast-themed musical.

The cast is uniformly strong with some exceptional standouts. Matthew Wright steals most of the laughs as Thomas, the Nostradamus who is no better than the average TV weatherman at predicting the future. Also outstanding are Theresa Kloos as Nick's wife Bea, a feminist in the making, and Eileen Brady as sparkly Portia, sweet Nigel's love interest. Ian Stewart is endearing as Nigel, the less bombastic and much more talented of the Bottom brothers.

In the role of Shakespeare, Scott Sumerak is sufficiently oily and sleazy as he tries to snatch Nigel's deathless poetry for his own use. In the lead role of Nick, Eric Fancher has all the tools to knock his part out of the park, and he is solid. But he consistently opts to color inside the lines of his character, never taking the kind of chances that could elevate his performance. (ie. From the beginning, we never really believe he hates Shakespeare, even in his song with that title.)

Fine supporting turns are offered by Brian Altman as a sexually repressed Puritan; Trey Milcowitz as the gently snarky Minstrel; John Polk, who plays the skittish money-man Lord Clapham (an apt name for a theatrical producer); and Tim Tavcar in the role of a not-so-shy Shylock.

Beck Center is one of the few theaters in town, outside of Playhouse Square, that can do justice to big, ballsy musicals such as Something Rotten, thanks to their large Senney Theater stage that easily accommodates casts of 25-plus singers and dancers. And Something Rotten makes splendid use of that facility.