'The Absolutely Amazing and True Adventures of Ms. Joan Evelyn Southgate' at Cleveland Public Theatre Is a Touching Celebration, Even If It Lacks Depth 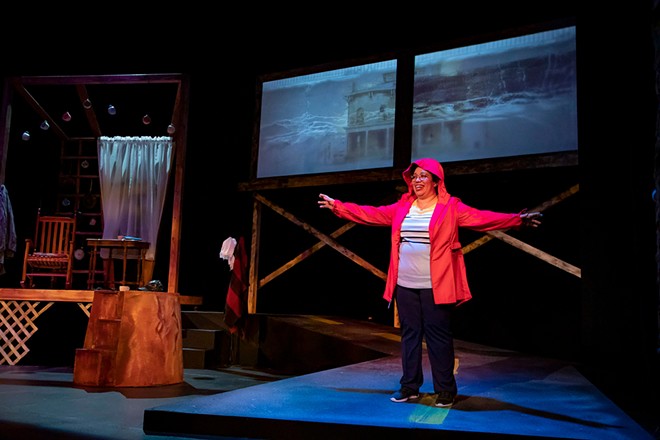 There are certain people in the Cleveland area who deserve a tribute, and certainly one of those is Joan Southgate. After a long career here in social work she decided, at 70 years of age in 2002, to walk a 519-mile Underground Railroad path from Ripley, Ohio (near Cincinnati) to St. Catherine, Ontario, Canada. Her goal was to draw attention to the brave freedom seekers and the "conductor families" that helped them along the way.

In "The Absolutely Amazing and True Adventures of Ms. Joan Evelyn Southgate," now at Cleveland Public Theatre, playwright and sole performer Nina Domingue crafts a tender, loving and frequently amusing celebration of Ms. Southgate's life and mission. What Domingue and director Nathan Henry don't do, however, is create a theatrical experience that resonates beyond a panegyric for this remarkable woman.

Southgate, who is alive and kicking, was sitting in the front row at this performance. She is clearly a powerful and tiny bundle—her diminutive height, under five-feet tall, is mentioned more than a few times in the show. She has been and is clearly a woman of energy. commitment and compassion, and one can only applaud her career and accomplishments, including the founding of Restore Cleveland Hope that celebrates and supports our city's Underground Railroad history.

This CPT production has its heart in the right place. But for a play to fully engage with a character, fictional or not, there has to be a willingness to explore all facets of the person. Otherwise, the product on stage is simply an acclamation, not an exploration in which the audience can participate.

That said, this 100-minute one-act touches on many aspects of Southgate's formative years as the only Black girl in class, growing up with influential parents and relatives. As she says, "I found trailblazing women." Her mother always told her, "Put your feet in the path," and Joan clearly listened and learned. Although the family recollections often aren't that remarkable and can become repetitive over the 100-minute run time, Domingue uses her electric stage presence to bring that little girl to life.

In her previous one-person play at CPT, "Ya Mama!" Domingue offered an autobiographical journey that, as I noted at the time, ignited the stage and was gloriously expressive. She is still just as magnetizing on stage, but this new script is so celebratory it leaves little room for nuance. Even when a possible fault is mentioned, such as Ms. Southgate's stubbornness, it is cited as a strength in service of a worthwhile cause.

Domingue and director Henry employ an array of theatrical devices to spice up the proceedings, including costume changes, screen projections (designed by Joe Burke), sound effects, songs, dance movement, original music (composed by Bill Ransom) and a set design with a platform, stairs, and a ramp. Some of this feels extraneous, with the costume pieces adding little and the percussive music occasionally distracting from the words.

The most noticeable missing element is just having Joan Southgate settle for a while and talk about the incredible achievements of the Underground Railroad, sharing her passion in a simple and straightforward manner without a lot of staging frou-frous. There is wisdom to the adage: When you have a powerful story to tell, get the hell out of the way.

The Absolutely Amazing and True Adventures of Ms. Joan Evelyn Southgate
Through May 14 at Cleveland Public Theatre, 6415 Detroit Avenue, cptonline.org, 216-631-2727