The Musical 'Dear Evan Hansen' is a Story For Our Times 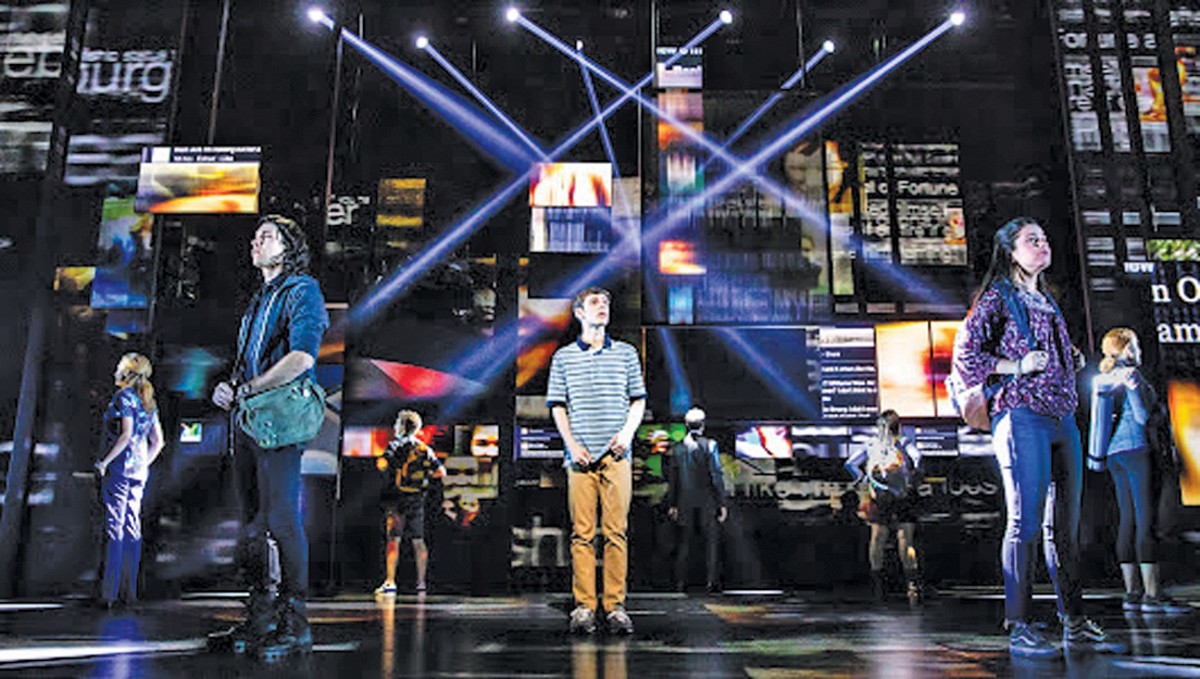 Social media is easy; human connection is hard, for the cast of Dear Evan Hansen. Photo by Matthew Murphy

When critically contemplating Dear Evan Hansen — that youth-oriented, social media-infused, Tony and Grammy award-winning Broadway musical, the national touring company of which just dropped anchor at Playhouse Square's Connor Palace — a favorite childhood poem about blind men trying to describe an elephant came quickly to mind. "The Elephant is very like a rope," concludes the one who has stumbled upon the pachyderm's tail. No, insists another, who has seized upon its great leg: "Tis clear enough the Elephant is very like a tree." The point, of course, is that our opinions about a thing — even a thing as unambiguous as an elephant — tend to be based on subjective experiences, and not so much on objective reality.

That helps, maybe, to explain the breadth of reactions that this phenomenally popular musical (artifacts from which have recently found their way into the Smithsonian's collection) has drawn from the nation's critics. Is the show (music and lyrics by Benj Pasek and Justin Paul; book by Steven Levenson) "powerful," "heartbreaking," and "gut-punching"? Or is it "mediocre" and "formulaic," its lyrics "clichéd," and its plot "underwritten"? Is our troubled protagonist Evan just "a lonely young man caught up in a web of self-devised deception ...," as the New York Times so kindly puts it? Or is he "a self-serving fabulist," and a "con man," as a critic for Slate would have it? And finally, is this a timely tale meant to open our eyes to the world around us? Or is it a self-serving flyby of trendy topics — teen suicide, social media abuse, the pitfalls of parenting in the internet age — that are freely invoked but never resolved in a meaningful manner?

Happily, there is at least one aspect of this lengthy two-act that compels an almost uniformly positive reaction: the performances. Headed by the supremely talented 21-year-old Ben Levi Ross (who made his Broadway debut as an understudy for three Evan Hansen characters, including Evan), the cast hit every note, every mark, and just about every heartstring during an opening week performance. Of particular note were Jessica Phillips as Heidi Hansen, Evan's loving but clueless mother, and Christiane Noll as Cynthia Murphy, distraught mother of teen suicide victim, Connor. They repeatedly filled the theater with muffled sobs as they inched their way through the impossibilities of parenting troubled teenagers in an era when face-to-face convos feel positively obsolete. "Does anybody have a map?" they sing; "Anybody maybe happen to know how the hell to do this?"

As Evan's obnoxious "family friend" Jared Kleinman, Jared Goldsmith gives us a young man by turns sleazy, funny and — once Evan has accrued enough social capital to start dissing others the way that he's been dissed — vulnerable. Rounding out the triumvirate of young male oddballs is Connor (Marrick Smith), who, despite having died of suicide early in the action, "visits" Evan and Jared often in the process of designing his internet legacy. The trio's Act 1, Scene 8, song-and-dance number, "Sincerely, Me," is one of the only full-out funny interludes in this often-bleak piece of work, and was well served by each actor's strong voice and impeccable timing.

The role of Evan's love interest, Zoe, was played by understudy Ciara Alyse Harris during last week's media night performance; and while we obviously can't compare her to Maggie McKenna, who usually occupies the role, suffice it to say that we didn't have any reason for complaint: With a well-modulated performance and a lovely voice, Harris made the role her own — and in the process, perhaps, provided some insight into just how tight this touring company is.

Much of the story, of course, sits squarely on Ross's shoulders, and relies on him selling us on the view that, while Evan may be weak, needy, and profoundly naïve, he is not a villain. [Spoilers follow.]

For the half-dozen readers not familiar with the play, the synopsis is this: Evan is a sad, socially awkward nerd who lives with his effusive, well-intentioned, but sometimes neglectful mother (can't blame Heidi: she's a thinly stretched single mom with a menial job who takes night classes to make a better life for her and her son). Initially, through a series of misunderstandings, Evan claims a false friendship with a classmate who died by suicide (can't blame Evan; the distraught parents practically browbeat him into confabulating a story that might bring them some solace). Eventually, with prodding from a fellow student, the overly involved, equally disconnected Alana Beck (Phoebe Koyabe), Evan launches an online "memorial project," to commemorate his imaginary friend; a speech he gives goes viral and — bam! — all of a sudden, this lonely nobody is a Somebody. At about this point, though, Evan crosses a line. He knows his lies are no longer in service to Connor's parents and have become squarely a bid for personal attention.

Meantime, under the false pretense of being her deceased brother's best friend, Evan finally manages to bed Zoe (can't blame Evan; it looks consensual), treats both Jared and his mother unkindly, and finally, his hand forced by factors outside his control, admits the nature and scope of his ruse to both Connor's incredulous parents and his own devastated mom.

Throughout, Ross does an outstanding job of creating a full, rich character, seamlessly incorporating a variety of nervous ticks, vocal catches, and sly asides that paint a complicated picture of a troubled, but sensitive, young man, ensuring that our sympathies remain on his side. (Plus, he can sing like a son of a bitch.) So when his house of cards crumbles, and Evan — against all odds — walks away from the fiasco with scarcely more than a slap on the wrist, we are primed to celebrate his salvation, rather than wag our finger over his unquestionably unethical and self-serving behavior.

Which brings us back to the central question: What, exactly, is this play all about? Is it a disturbing tale of moral bankruptcy in the internet age, wherein no one is ever entirely responsible for their own bad choices and consequences are minor at best? Or does it reveal the confusion of contemporary life, and respond to it with compassion?

Go see Dear Evan Hansen. (Chances are, you'll love it.) Then, like the blind men with the elephant, feel free to decide for yourself.