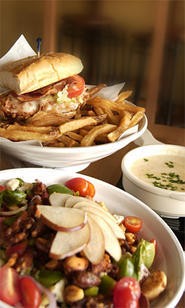 Eartha Goodwin
Madd Chef's cooks up additive-free, locally grown "clean foods."
We're not sure why chef Richard Cicic is so darn madd. Barely in his thirties, he's already racked up enough professional achievements to make most chefs a little jolly, including a formal education at the Pennsylvania Institute of Culinary Arts, a stint at Little Italy's Baricelli Inn, and a chance to don the top toque at the classy Murphin Ridge Inn outside Cincinnati. As if that weren't enough, he's also executive chef for the Cleveland Clinic.

Last October, Cicic and business partner Matt Milavec opened Brunswick's Madd Chef's, just outside Medina. With a 600-square-foot dining room, a 1,100-square-foot professional kitchen, and a righteous natural-foods philosophy, the chef is poised to do it all -- dine-in, carryout, and catering. Ambitious expansion plans are also taking shape for the BYOB.

Given all this firepower, we were ready to be wowed. And yet our two dine-in visits -- one during a weeknight dinner hour, the other during Sunday brunch -- were less than impressive, marred by confusion, flubbed orders, and uneven food. We learned afterward that Cicic had hired an entirely new staff just days before our arrival; this may explain the problems we encountered. We're inclined to give Madd Chef's the benefit of the doubt, since Cicic's "clean foods" concept (i.e., using ingredients free of chemicals and additives, and grown as close to home as possible) is both admirable and timely. Plus, the ambiance inside the sit-down part of his op practically burbles with rustic charm.

Painted in tasty shades of pumpkin, maize, and chocolate, the tiny dining room is a prettily appointed space that invites diners to pull up a chair. Snowy white napkins and hefty flatware lend an upscale touch; and, as a sort of kinetic stand-in for traditional wall art, a flatscreen television silently broadcasts Food Network.

While the lunch-and-dinner menu is fairly narrow -- sandwiches, salads, two soups du jour, and 11 (mostly chicken) entrées -- the variations on each theme seem endless. Just ordering a salad is a decider's dream: Want it topped with steak, tuna, or chicken? Want that chicken fried, grilled, or prepared Buffalo-style? Sesame dressing, buttermilk-herb dressing, or pesto-balsamic vinaigrette? Full size or half-portion? Paired with soup, or served as part of a soup-salad-sandwich combo?

Unfortunately, we suspect this plethora of options made it hard on the rookie staff. At least we hope that explains why our Cowboy Grinder, described as containing "smoked beef brisket with Jack Daniel's barbecue sauce, grilled onions, grilled peppers, and provolone cheese," never hit the mark. On the first go-round, it was nothing more than a scant layer of beef on a grinder bun; after we took it back to the counter for remediation, it was returned with the promised barbecue sauce and provolone, but was still bereft of onions and peppers.

On the other hand, Madd's Belgian frites were a delight: golden and crispy around the edges, and served with zesty roasted-garlic ketchup, curry ketchup, and garlic-pesto aïoli. The buttermilk fried-chicken salad -- a crunchy toss of organic greens, diced cucumber, and juicy fried chicken breast -- was also good. With it, we had a cup of housemade potato chowder -- a tasty if tepid affair, with a skinned-over top that suggested it had lingered too long in the kitchen. And while we loved the big, hearty flavors of the Tuscan pasta -- penne with pancetta, prosciutto, olives, and sautéed chicken -- it was drowning in roasted red-pepper olio. As a final blow, the chocolate pot de crème was so unevenly baked, it was clotted on top and runny below.

The service -- which Cicic admits was in a state of flux -- also left us puzzled. When we tried ordering at the counter, a wannabe waitress told us to take a seat. Not long afterward, though, she was too swamped at the register to make it back to our table. When it became clear that no one was going to wait on us, we trudged back to the counter and joined the line. By then, of course, the kitchen was backed up, and we had to wait another 30 minutes for our food to arrive.

Fortunately, the reservations-only Sunday brunch was a sit-down affair; two servers were on the floor that day, taking orders and filling coffee mugs. As for the eats, the 16-item menu hit all the high points, with dishes that ranged from generously stuffed omelets, whole-grain pancakes, and corned-beef hash to salads, sandwiches, and a mouthwatering stack-up of grits, cornmeal-crusted catfish, and a pair of fried eggs. All brunch items are pegged at a somewhat pricey $9.95, but if you want a side of bacon or an extra pancake, just ask. Cicic promises that no one goes home hungry.

There were other nice touches -- a warm muffin began our meal as a sort of midday amuse-bouche, and real maple syrup accompanied the pancakes. Unfortunately, the drop biscuits that were supposed to accompany the catfish were MIA. And while we ordered Brunswick griddle cakes (whole wheat and cornmeal pancakes topped with scalloped apples), what we got was a plate of blueberry cakes.

Maybe we don't know what Cicic has to be madd about. But if this critic seems a little cranky, you can probably see why.