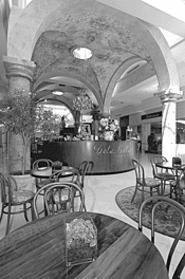 Walter Novak
Good Eton: Lunch at Isola Bella might feel like a midday vacation.
Just when the proliferation of "quick-serve" pit stops had convinced us that elegance has been expunged from the midday meal, along comes Isola Bella, a "beautiful island" of fanciful indulgences, nestled since April inside the Atrium Shops at Eton: Chagrin Boulevard (28699 Chagrin Boulevard, Woodmere, 216-464-7500).

One part exclusive boutique (carrying one-of-a-kind jewelry, handbags, glassware, and more) and one part refined Euro-style café, the space -- carved right out of the middle of the Atrium's interior walkway -- is the inspiration of event-planner and floral designer Pieter Bouterse, of Pieter Bouterse Studios in Cleveland. A native of Holland with an eye for fine art, Bouterse named the spot after a resort island in Italy's Lake Maggiore, famous for its exquisite shops, restaurants, and gardens.

Isola Bella's thickly upholstered chairs, its ancient-looking ceiling frescoes, and its gleaming marble floors do invite fantasies of holing up in a tiny Mediterranean trattoria. Happily, the small menu of rustic sandwiches, salads, and panini -- along with a tiny collection of thoughtfully chosen Old World wines, beers, and ales -- does little to detract from the fantasy.

Café manager Nathan Sheeran (who came over with fellow Moxie vet and general manager Richard Snyder) jokingly calls the easy-to-assemble comestibles "Italian-style bar food," but that doesn't begin to address their gourmet appeal. Take the small, $6 sandwich of perfectly trimmed grilled artichoke hearts, arranged on a sturdy artisanal roll from On the Rise Bakery in Cleveland Heights (3471 Fairmount Boulevard). Good as it was, the sandwich was merely the anchor for a tiny feast that included freshly made pesto, thick slices of fresh mozzarella and sharp pecorino Romano cheeses, and a tantalizing salad of caper berries, olives, cornichons, red pepper, and roasted tomato wedges. Light, comparatively healthful, yet savory enough to shake each and every taste bud to its core, this was the most delightfully earthy lunch we've had since that trip to Yountville.

Other midday options include cured prosciutto or sopressata sandwiches; crab, pasta, or caprese salads; and a grilled-lamb panini, topped with yogurt-feta sauce and roasted peppers.

After 4 p.m., the café trims the menu to simple cheese plates and antipasti. Meantime, a small selection of locally made, European-style pastries, as well as biscotti, scones, and croissants, are available all day, as either breakfast or after-dinner companions for ample espressos, cappuccinos, lattes, or cafe mochas.

Speaking of chocolate, Isola Bella is also the exclusive Ohio retailer for MarieBelle New York gourmet confections. The bite-sized chocolates are handmade in SoHo, in more than 20 exotic flavors, including Earl Grey tea, cardamom, lavender, champagne, and dulce de leche; and like little, edible works of art, each is silk-screened with a colorful, whimsical design. Extraordinarily rich, yet almost ephemerally delicate, they range in price from $1.50 for a single piece to as much as $85 for a box of 36. (The café also serves MarieBelle's hot chocolate, a divinely decadent drink that, Sheeran promises, is "nearly thick enough to stand a spoon in.")

Local flavor . . . We've reached the end of the season for the North Union Farmers Markets in Parma and North Olmsted. But Ohio's bounty -- melons, squash, tomatoes, and more -- is still rolling in weekly in Westlake (Saturday mornings at Crocker Park, outside Trader Joe's), Lakewood (Wednesday early afternoons, at the intersection of Arthur and Detroit avenues), and Cleveland (Saturday mornings on Shaker Square). Besides buying direct from local farmers, slow-food fans can show their support by snagging a ticket to this year's Farm to Table benefit, to be held on the terrace of the Cleveland Botanical Garden, Monday, September 19, from 5:30 to 8:30 p.m. There's live music, Ohio wines, and the creations of 18 chefs from such local hot spots as Flying Fig, Parker's New American Bistro, Fire Food and Drink, and Fahrenheit. Tickets are $70 and can be ordered by calling 216-707-2818.