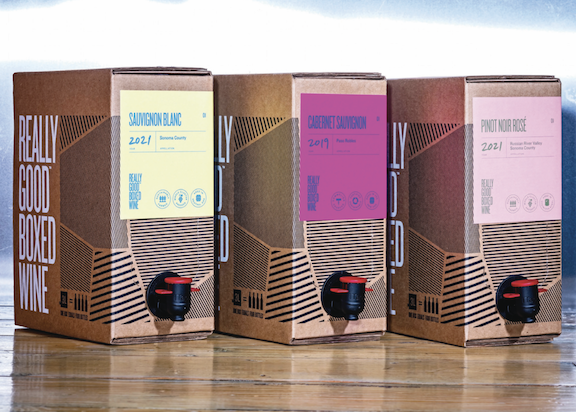 Boxed wine has an unfortunate association with inferior vintages made to be chugged at sorority mixers.

While major boxed wine brands available at the grocery store have their share of the market, most wines that connoisseurs consider palatable historically are bottled instead of boxed.

That’s changing, though. Wine has come a long way, and it looks like the future of higher quality, globally ethical wine distribution requires an alternative to expensive, bulky- yet-delicate glass bottles. You can already buy wine in cans, Tetra Paks (those handy cardboard containers that chicken stock and almond milk often are sold in), kegs and vessels of other shapes, sizes and materials, but Cincinnati-owned Really Good Boxed Wine is touting the benefits of thinking inside the box.

“I would say there are three major benefits to boxed wines overall,” Whitman says. “The first is that when you open it and you tap it, it stays fresh for six weeks.”

Wine undergoes a chemical transformation called oxidation after it’s been opened, which causes the drink’s flavor and integrity to degrade as time presses on. Opinions vary, but a traditional bottle of wine is best enjoyed the day its cork is removed. Many wines benefit from “breathing” for a duration of time after opening, but if you wait too long to drink the remainder, oxidation can bitter the taste, resulting in a flat astringency. The benefit boxed wine offers, then, is that it’s exposed to a minimal amount of oxygen as a result of the vessel’s design.

“The second is the cost. There’s cost savings all over the place,” Whitman says. “Our packaging costs are about 90% lower than the equivalent in bottles.”

A box of wine contains three liters, the equivalent of four standard 750-milliliter bottles. There’s a significant manufacturer-cost for every aspect of the product being sold: the wine itself, the bottle, the label, the cork and the protective foil seal; many essential components needed to sell a few liters of wine.

“Four glass bottles, four corks, eight labels, four foils versus one box, one bag and two labels,” Whitman lists. “The packaging costs are 90% lower, so we can pass a lot of those savings on to the consumer and actually invest more in the quality of the wine.”

Specifically, this is an estimated 50% discount on highly valued wine thanks to the savings made available by its utilitarian packaging.

The quality of boxed wine in general has been improving over the years. Master sommelier Andy Myers has even endorsed Really Good Boxed Wine, making it the first boxed wine with such an affiliation. The prestigious title of master sommelier denotes complete authority of every aspect around vinification and is held by only 269 people globally, so Myers’ endorsement is a big deal for the Cincinnati brand.

But amazingly, that superior quality comes with a lower price point for consumers, too.

“A three-liter box weighs about the same as two bottles of wine when you ship it, so freight cost comes into play when shipping out to consumers, so we can pass some of those savings on to the customer as well,” Whitman says. “The cost that we pay in production allows us to invest more in the quality of the wine itself, which I think is sort of the hidden secret of how we are putting such high quality wine for such a discounted price.”

That’s a secret that’s not so hidden anymore.

A mid-tier bottle of wine, something respectable enough to bring to a nice dinner party, starts at around $15. The wine going into Whitman’s boxes is valued at around $30 to $40 per bottle and, with boxes priced at $65 (with the equivalent of four bottles inside). That’s quite a palatable deal.

Whitman also says that the packaging for boxed wine is considerably more eco-friendly than that of bottled wine.

Now, what’s in a box of Really Good Boxed Wine?

On top of producing its own juice in California, the direct-to-consumer brand partners with California producers, winemakers and vineyards for its product, and there have been talks with growers and makers in Washington and Oregon for future releases. The wines currently available are cabernet sauvignon, sauvignon blanc and a pinot noir rosé.

The cabernet sauvignon is big and fruity, packing a wallop with 14.5% alcohol by volume. Pair the wine with some grilled cheeseburgers or some portobello steaks with a nice herbaceous chimichurri, and it will perform quite honorably in complementing the meal.

The wine stays fresh longer than a normal bottle thanks to the oxidation- resistant design, meaning this writer could pour a single glass without worry of waste.

But, to be frank, the wine is good enough to warrant an extra glass.

To purchase Really Good Boxed Wine, which can be shipped right to your door, or sign up for its monthly subscription service, visit reallygoodboxedwine.com.